If you follow me on Facebook, I’m sure you’ve already heard more than enough about all the fun we had this summer making a short film for a local film fest. But there are several things about this experience I don’t want to forget, and that’s where my blog comes in!

Since we heard about the film fest in late spring, my son started planning to submit a film. I’ve always known from watching him work on his projects that it’s a lot of effort to come up with a story idea, write the story, cast it (beg, plead and recruit people to help you!), find or make all of the props, come up with costumes, and finally, the easy part…shoot the film and edit it. Until I was actually part of this process in a direct way, I didn’t truly understand how much work it involved.

At the beginning of summer, he heard that the theme of the film fest was “My Hometown.” Throughout the month of June, he came to me with different story ideas. They were good, but each one had its challenges with figuring out how you would actually pull it off. (For example, it’s kind of hard to shoot a movie in the ocean, when you don’t have an underwater camera, a boat or a mermaid. Same goes with outer space, the desert, etc.) 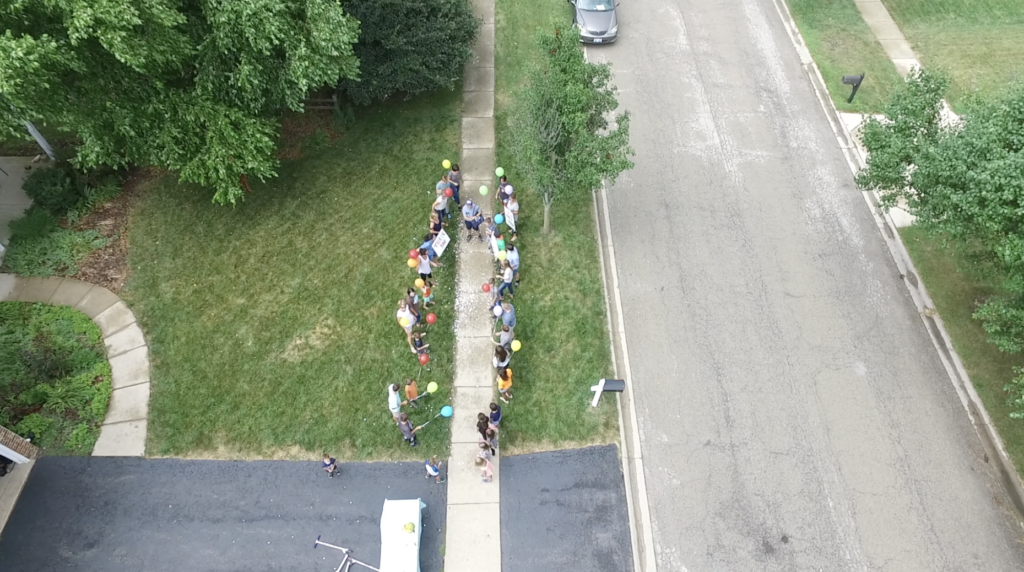 I started pondering the concept of “My Hometown.” We’ve only lived in this town for four years, so it’s only started to feel like a place we would call our “hometown” in the last year or so. What is it that makes a place feel like home? What are the things that have happened to us that have transformed a place where we felt like we were strangers into our hometown?

Several people came to mind. Some were friends we have made. Some were great neighbors. But some were just the ordinary random people you interact with on a daily basis. The guy at the grocery store. The bus driver. The mail man. And that’s how the concept of our story began.

I thought of one person who was a big part of our life the first year we lived here. This person was part of our everyday routine, until one day when he didn’t show up. It wasn’t until we experienced life without him (and instead with a replacement) that we realized how much we appreciated him.

From there, I remembered a story I had recently read about a mailman who always delivered the mail to the wrong houses. Despite his inefficiency, the community loved him, and they organized a parade for him when he retired. I combined our personal experience with the story about the mailman, and asked Andrew if it would be OK if I tried to write the script.

I’ve been writing stories and telling stories in various formats my entire life. I’ve written for newspapers and my blog. I’ve used video and photography to tell stories. But I haven’t ever written a screenplay. This was a different way of thinking about how to tell a story. In fact, I’ve always been so intimidated by writing any type of fiction, that I’ve never attempted it before. But this story was based on real life, so it appealed to me. 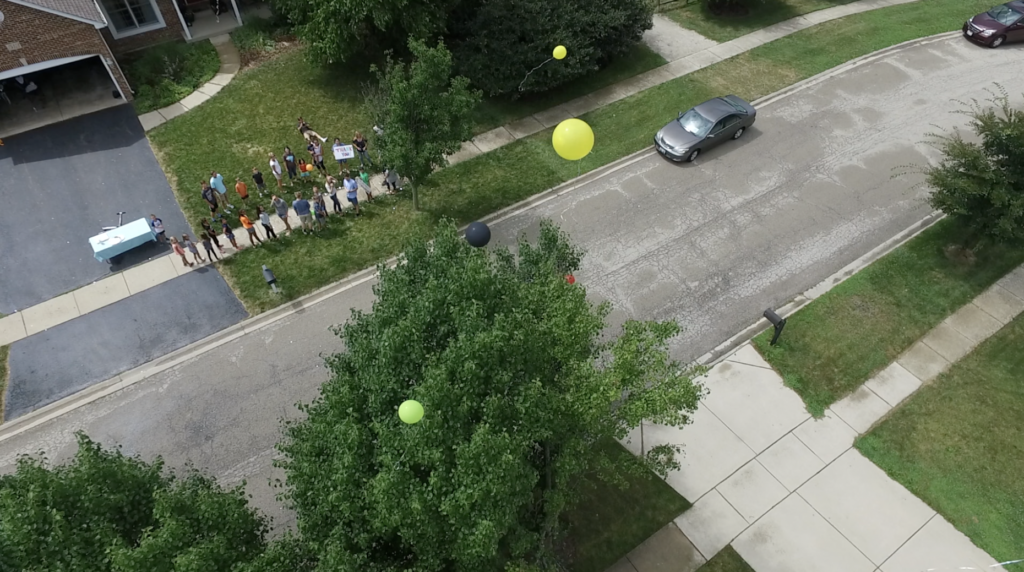 We knew the most challenging scene in the movie to shoot would be the final scene in which we had the “parade,” which we turned into more of a party on the sidewalk. We would need to recruit a lot of people to help us out. It doesn’t sound THAT hard, but asking people to come over to be extras in your “short film” just seems weird. How do you get people to give up time in their day to be part of something that sounds a little crazy?! 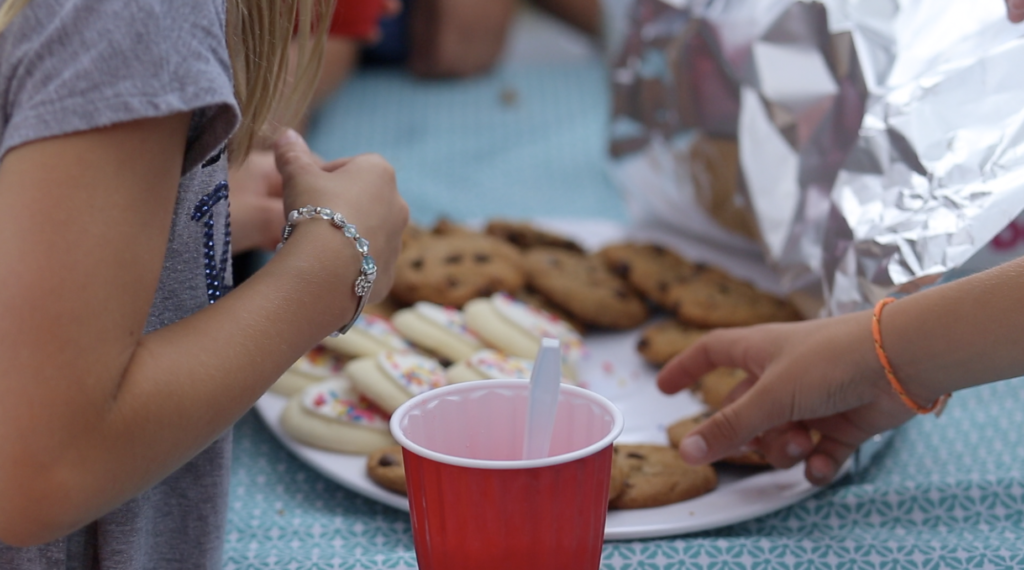 We decided our best bet would be to bribe people to come to our fake retirement party for our fake mail man by turing it into a real party! We offered slushies and cookies to anyone who would come by our house for 45 minutes on a summer day.

We had started this whole process about a month later than we should have, so we only had two weeks to cast, prop, shoot and edit the film before we went on vacation. Because of our crazy schedule, we basically could only find a 45-minute time slot on a Friday when everyone in our cast was available AND our family was free.

We recruited 36 people to help us, and asked them to show up to shoot the scene at 2 p.m. The only problem was the forecast called for a 90 percent chance of rain at 2 p.m. 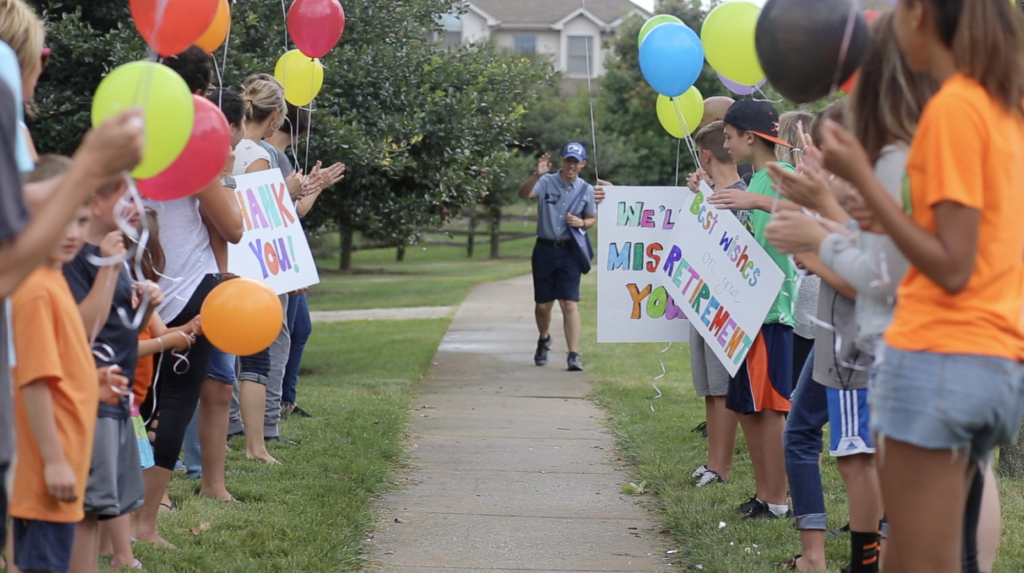 We had a lot of work to do to get ready for our fake party. We had to blow up balloons, make fake signs, buy confetti, make slushies and snacks and communicate with everyone involved.

It rained all morning while we were working on all of this, but I had a very strong gut feeling it was going to be OK.

“Don’t worry about the rain,” I kept telling everyone. “At 2 p.m., the rain is going to stop, the sky will clear, and we will have 45 minutes to shoot the scene. Hopefully, we’ll also get a rainbow.”

Throughout the morning, I kept getting text messages from the people we had invited.

“Are you still doing this?”

At about 1:45, when people were supposed to leave their house to get to our house, the texts really poured in.

“It’s pouring here, are you sure?”

“It’s raining so hard I can’t see to drive.”

By the time everyone got to our house, the rain was just a drizzle. We gathered everyone in our garage to wait until we were all there.

At 2 p.m., the rain stopped. We headed outside to shoot the first part of the scene. The clouds continued to separate. Eventually the sun started shining.

I checked repeatedly for my rainbow, which sadly I didn’t get that day. I was still convinced this was meant to happen. It took us about 45 minutes to shoot the scene, just as we had planned. Once we were done, we put everything back inside the garage, and it started raining again. 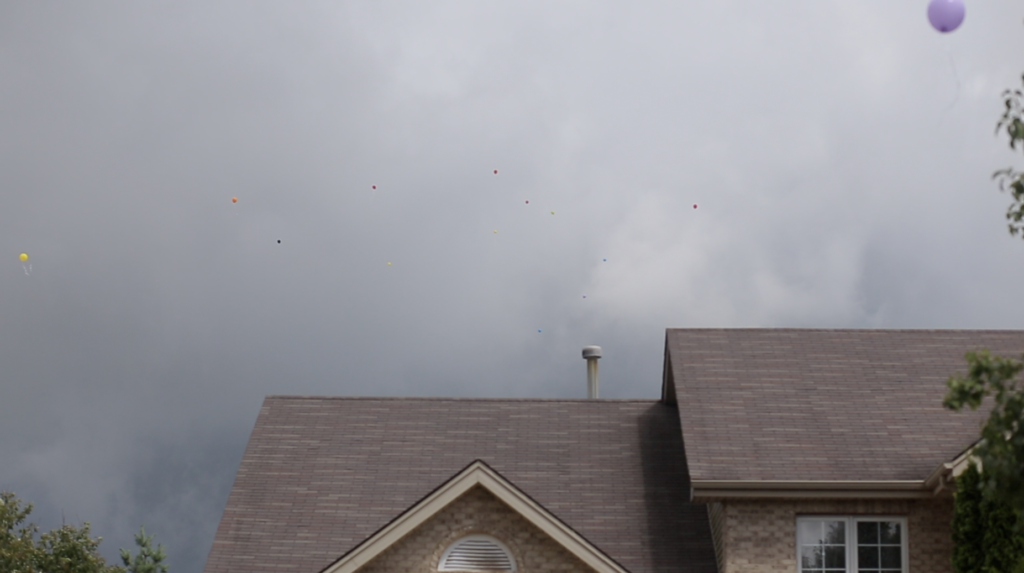 We ended up having so much fun that afternoon. Lots of people hung around for several hours after we shot the scene.

There were two other things that happened that I wanted to write about. Sadly, I’ve already far exceeded the acceptable word count for a blog post, so I will save them for another day.

Let me know you were here by leaving a comment! I would love to hear your thoughts on all of my thoughts. 🙂

If you haven’t watched our short film yet, you can do that here: