Up until three weeks ago, I could take all of the facts I knew about gorillas and fit them neatly into one sentence. These days, I am an entire blog post full of gorilla knowledge, especially when it pertains to the specific family of gorillas living at the Brookfield Zoo.

As most of you know, my feelings about gorillas changed dramatically a few weeks ago, when I randomly walked into the gorilla house at the zoo at the exact moment that Koola was giving birth. (Yes. I do know the gorilla’s name, and I will go on to amaze you with even more gorilla facts if you keep reading.)

I already had my camera with its 500 mm lens in hand, and for four minutes, I snapped photos of the newborn until I was politely asked to leave, along with all of the other visitors to the gorilla habitat. Zoo workers wanted to give the mom and baby some privacy. During those four minutes, I had some kind of supernatural bonding experience with the mother gorilla. I looked into her eyes and felt like we were sisters. I also designated myself as THE Official Brookfield Zoo Baby Gorilla Photographer and pledged to make the best use possible of my zoo membership by visiting this baby as often as possible.

On Friday, I made my first visit back to see my newborn gorilla family member who is now three weeks old. We had a 36-hour rain storm, which caused all of our activities to be cancelled, and it was my day off work.

I decided that visiting the zoo on a super rainy day would be the best idea possible because I would have the zoo to myself. I planned to leave early in the morning and get to the zoo just as it opened. But amazingly, when my children heard about my plan, they invited themselves along, as well as one of my “bonus” children, and we needed to leave a bit later in the day. 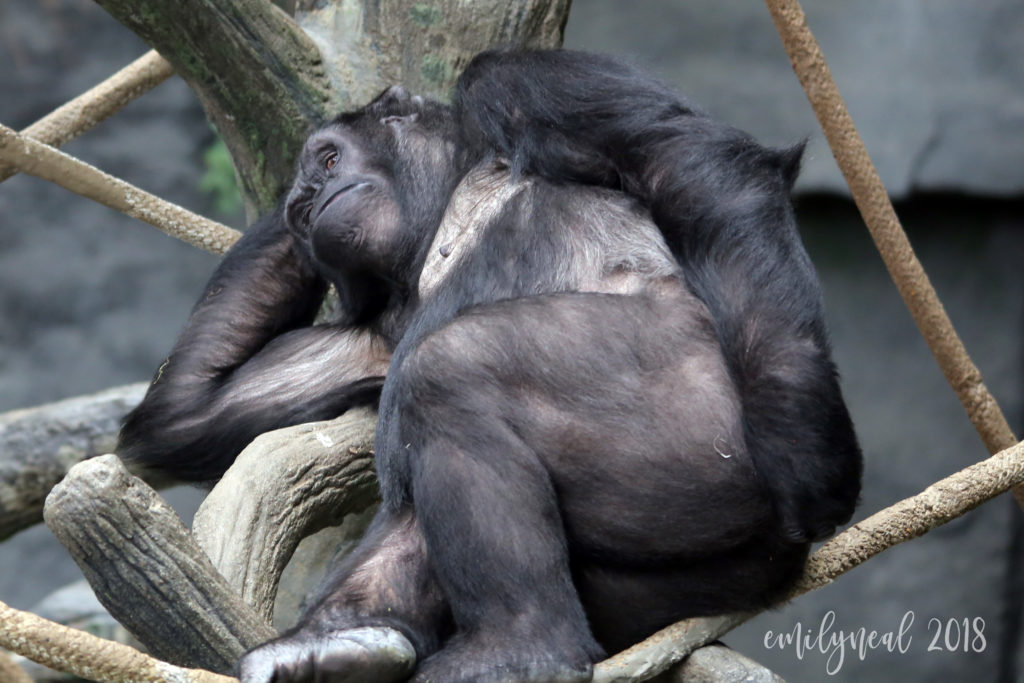 By the time we arrived, the rain had stopped. And while the zoo was not nearly as busy as usual, there were other people there. We headed straight toward Tropic World, and I practically ran through the first two rooms to get to the gorillas. All three of the female gorillas seemed to be napping, while the two juveniles, Nora, 4, and Zachary, 2, were wrestling and playing. 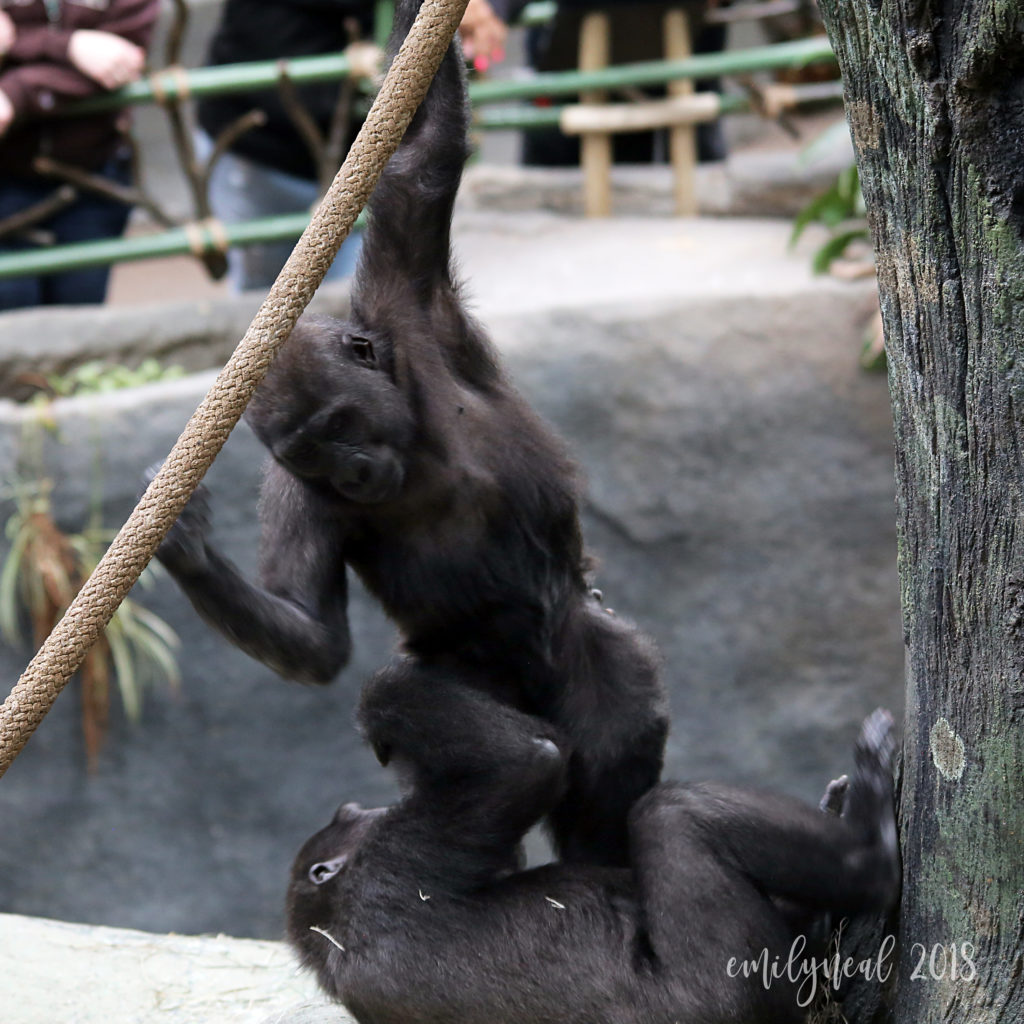 The giant silverback male, Jojo, was quietly observing all of the activity. 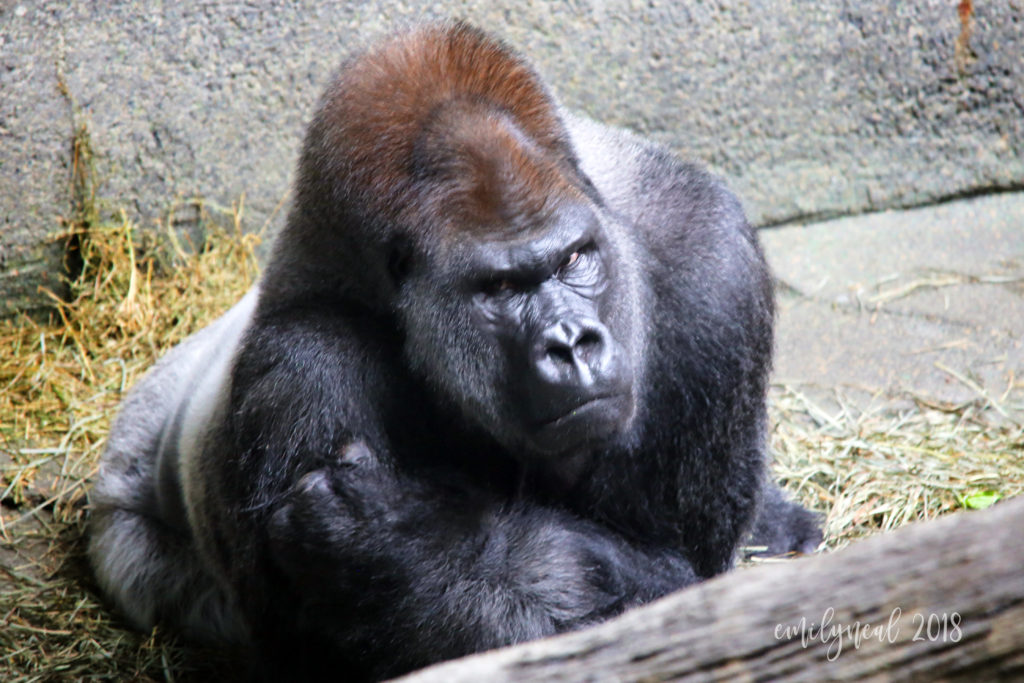 At first, we couldn’t find the baby, and I panicked that we had made the one-hour drive for nothing. I asked a zoo volunteer if the baby was in the habitat, and he told me that “she” was sleeping by her mom. The zoo hasn’t announced yet if the baby is a boy or a girl, which has been curious to me. So, I used my amazing investigative reporter skills to Google the reason for this. This is the part of the blog post where I will now impress you with my depth of gorilla knowledge. 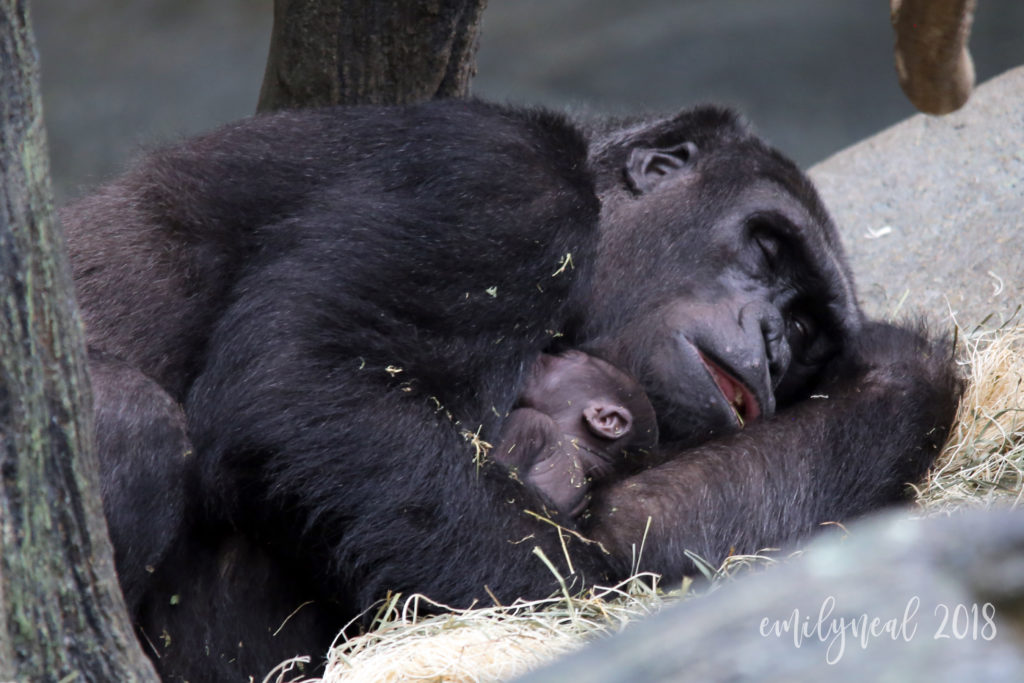 When a gorilla gives birth to a baby, the mom keeps the baby very close to her at all times for the first three to four months. She also tries to protect the baby and shield the infant from view. 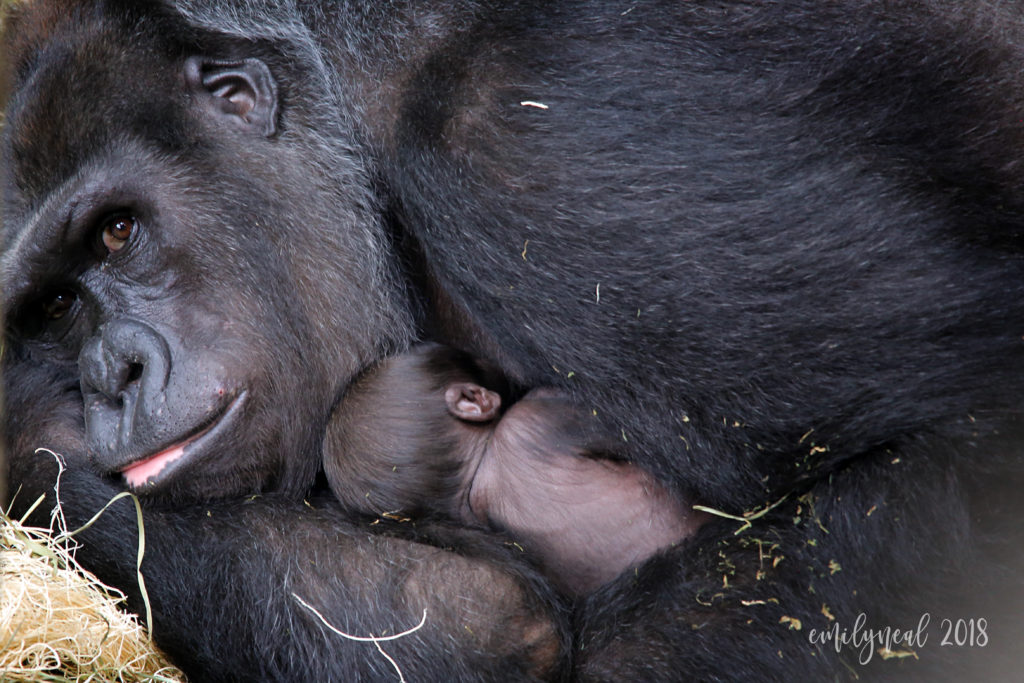 Zookeepers don’t take the baby from the mom unless it needs medical care. The mother gorilla has everything she needs to keep the baby safe and fed. So, zookeepers will watch the baby from afar and try to determine its gender.

I also did some research and learned that when Zachary was born, the zoo didn’t name him until he was four months old. The zoo had a contest to decide the name.

The baby will cling tightly to its mother at all times for the first four months. At that point, it will begin to ride on the mother’s back. I literally can’t wait to see MY gorilla baby do this in a few months.

So, anyway… we watched the mom and the baby sleep for about 20 minutes. When other visitors came along, I would point out the baby snuggled tightly under its mom and enlighten them with my vast resource of gorilla facts. I also would tell them about how I saw the baby being born and try to impress random strangers by showing them photos on my phone. I’m afraid that I might have shared my story with at least one family twice. (All of the other zoo visitors acted amazed at my first-hand knowledge of the gorilla birth, but I’m fairly certain they secretly thought I was crazy.)

Random stranger: “Do you know how old the baby is?”

Next time I go to the zoo, I’m planning to wear a bright blue polo and khaki pants, along with a lanyard. Hopefully, people will think I actually work for the zoo, and it won’t be as weird when I try to strike up conversations with every stranger in the gorilla house or elbow my way into the best position to get a photo.

We left the gorilla house for a while during all of the napping, but came back about 20 minutes later. At this point, Koola and the baby were starting to move around, and we got to see them wake up. Koola nursed the baby, and then grabbed her leg and stretched it so far above its head, I thought it would snap. Apparently, she was cleaning out the baby’s private parts with her finger, as gorillas will do. 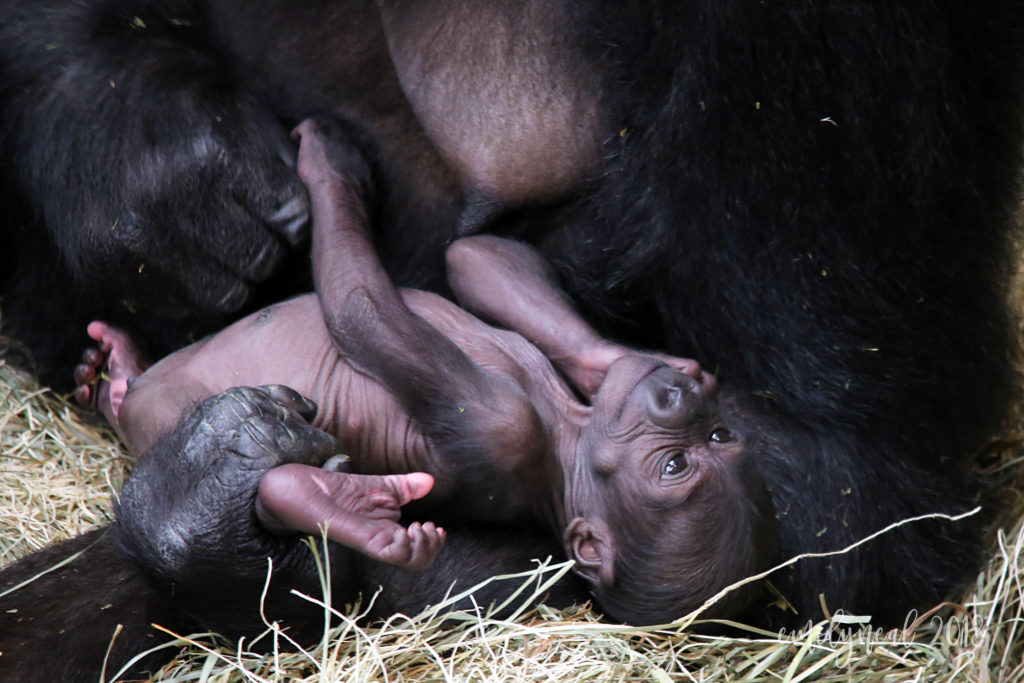 Nora, the baby’s four-year-old sister, kept trying to lick the bottom of the baby’s outstretched foot. Koola, the mom, would repeatedly whack Nora in the head to get her to stop. (I wasn’t sure why it was socially acceptable to clean her butt with your finger, but licking a foot was so annoying.) 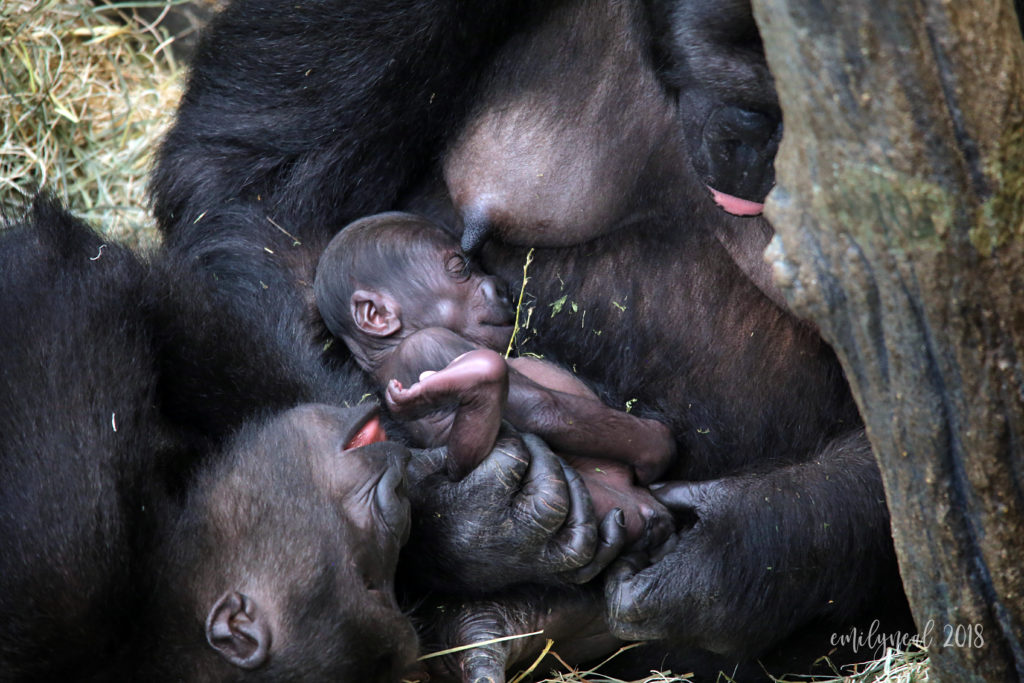 Nearby, Zachary, 2, also must have been needing some attention from his mom, Kamba. Zachary snuggled up to this mom, who kept stroking his head, as if she was trying to get him to take a nap. I could relate to this SO MUCH. 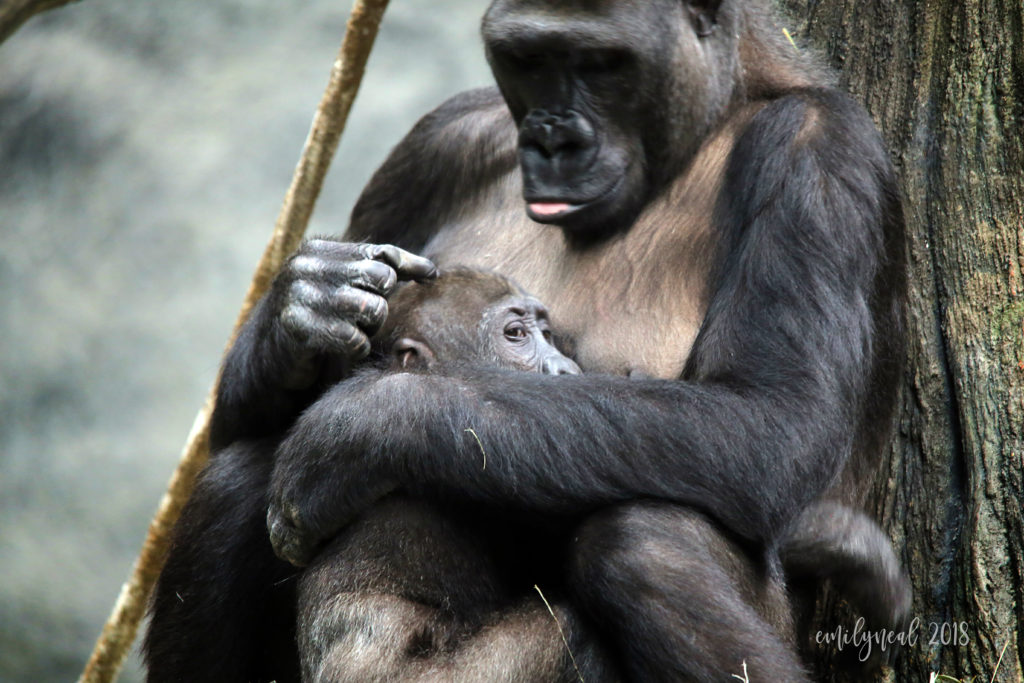 It was literally the sweetest thing ever. 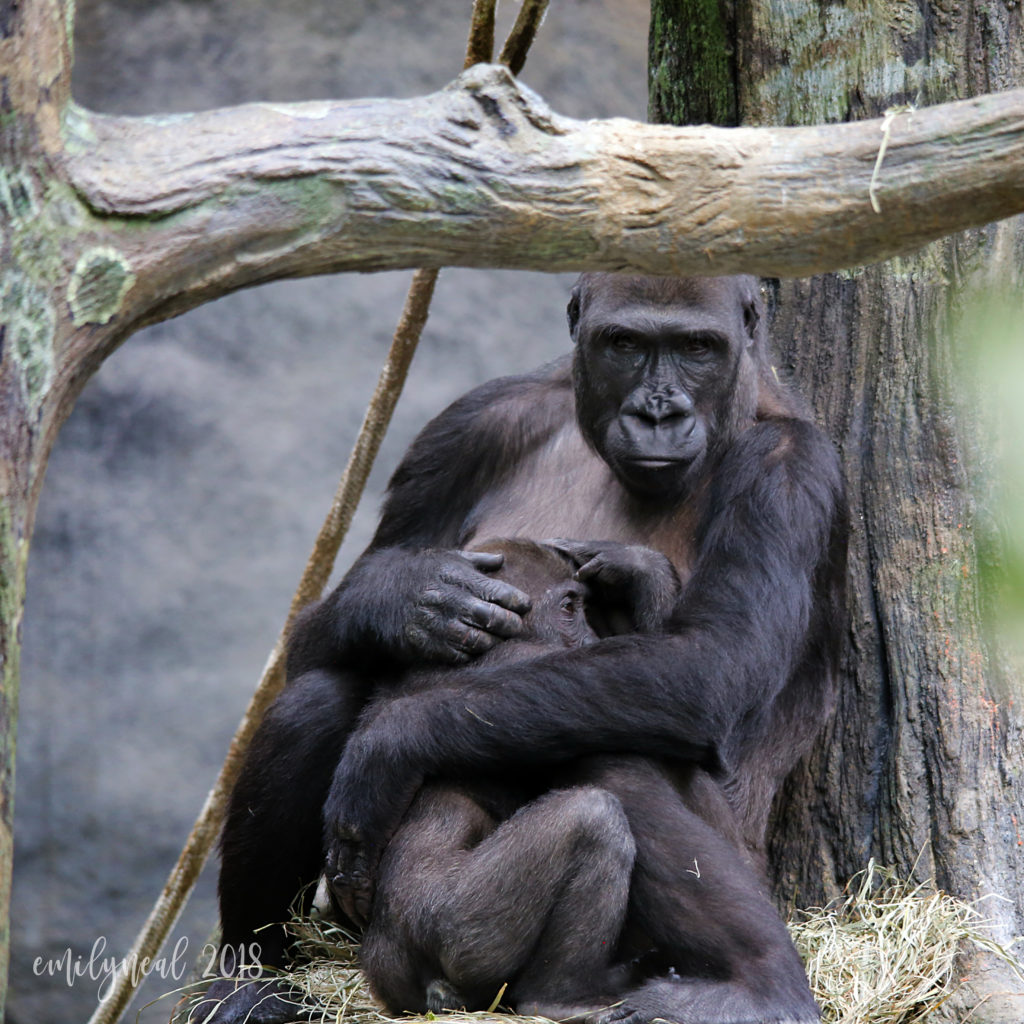 Kamba is the 13-year-old daughter of Koola. There is one other female in the group, Binti Jua, 30, who is Koola’s mom. I did a little math on this whole set-up and figured out that Jojo, the male, is the father of both Nora and Zachary, which means he had to mate with his daughter, Kamba. Sometimes, it’s best not to really think through all of the gorilla facts in your head.

Anyway, we got to see the baby smile as her mama cleaned out her belly button. It was the cutest thing ever. 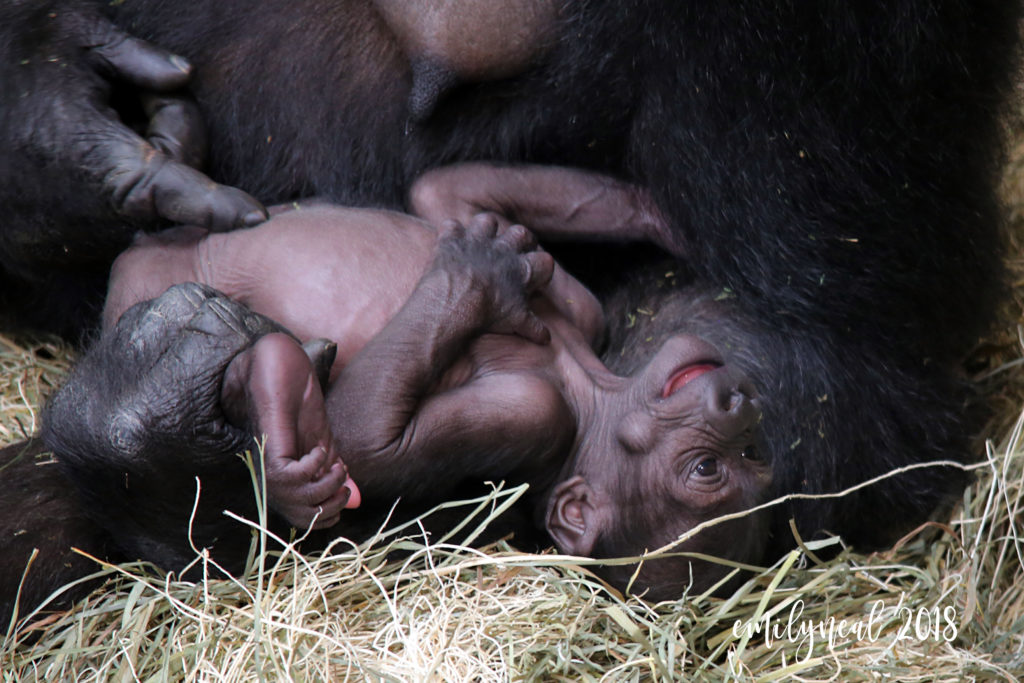 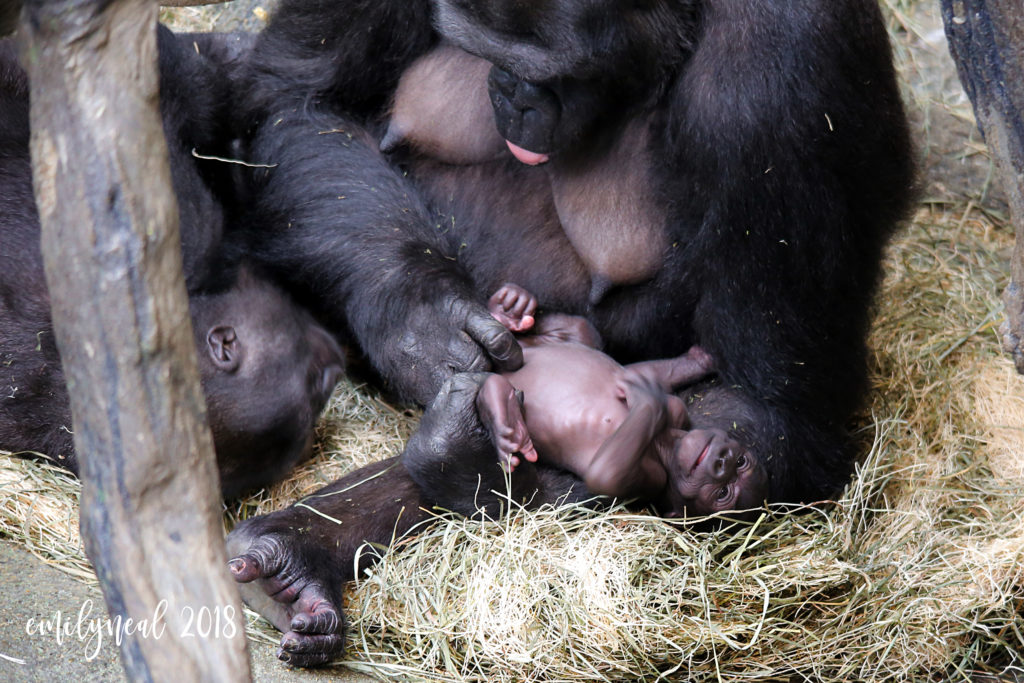 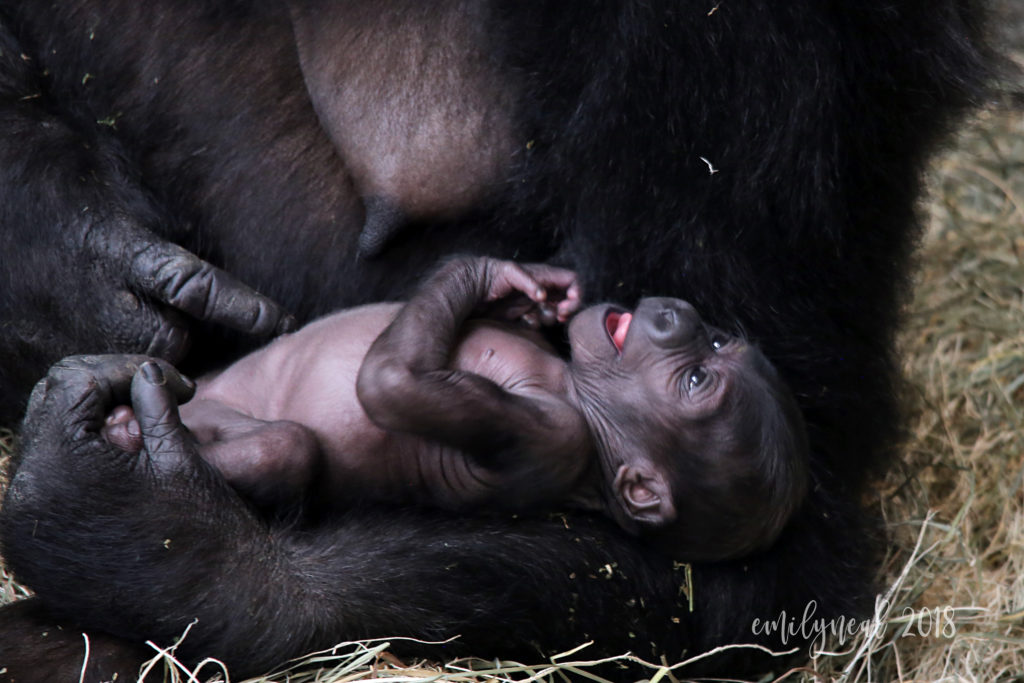 At that point, it was time for the dolphin show, and we had to sprint across the zoo. Otherwise, I could have stayed there for at least another hour.

Just a warning that when I get interested in a topic, I don’t take it lightly. You can expect to see many more trips to the zoo by your OBZBGP (Official Brookfield Zoo Baby Gorilla Photographer), so just be prepared.

Excuse me while I go work on my name tag for my next trip to the zoo.