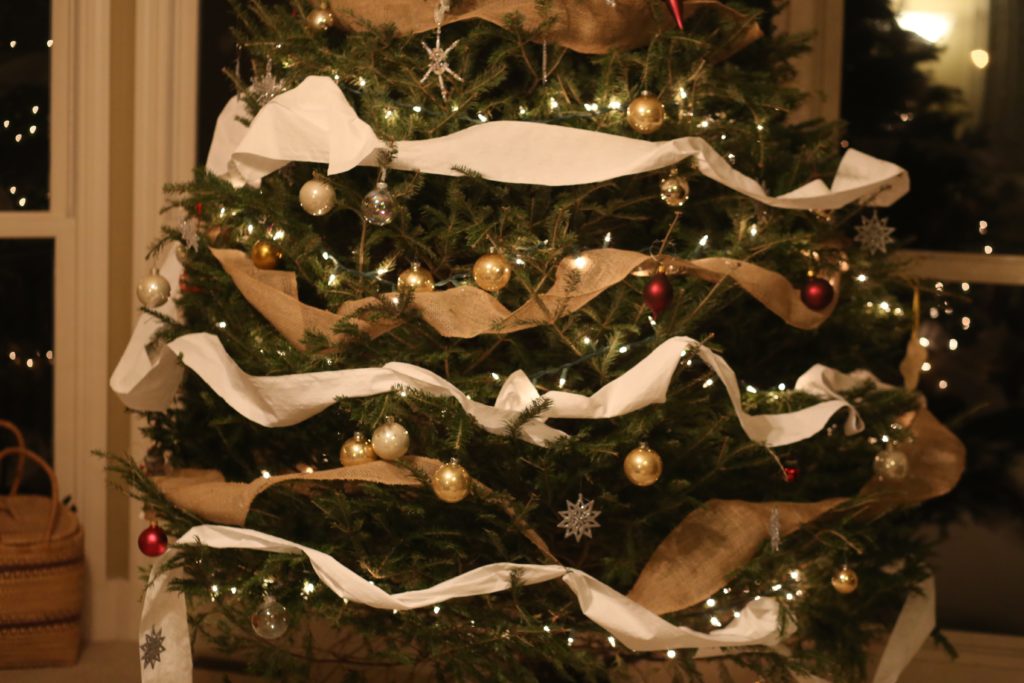 A few days ago, our oldest son stopped me as he was rushing to head out for his early morning drive to school. He looked perplexed.

“Mom, why were you wrapping toilet paper around the Christmas tree?”

A few days earlier, our 15-year-old confronted me in a similar manner.

“Ummmm, Mom?” “Why did you come running down the stairs at 6 a.m., throw the elf in a bowl and pour Froot Loops on top of him?” 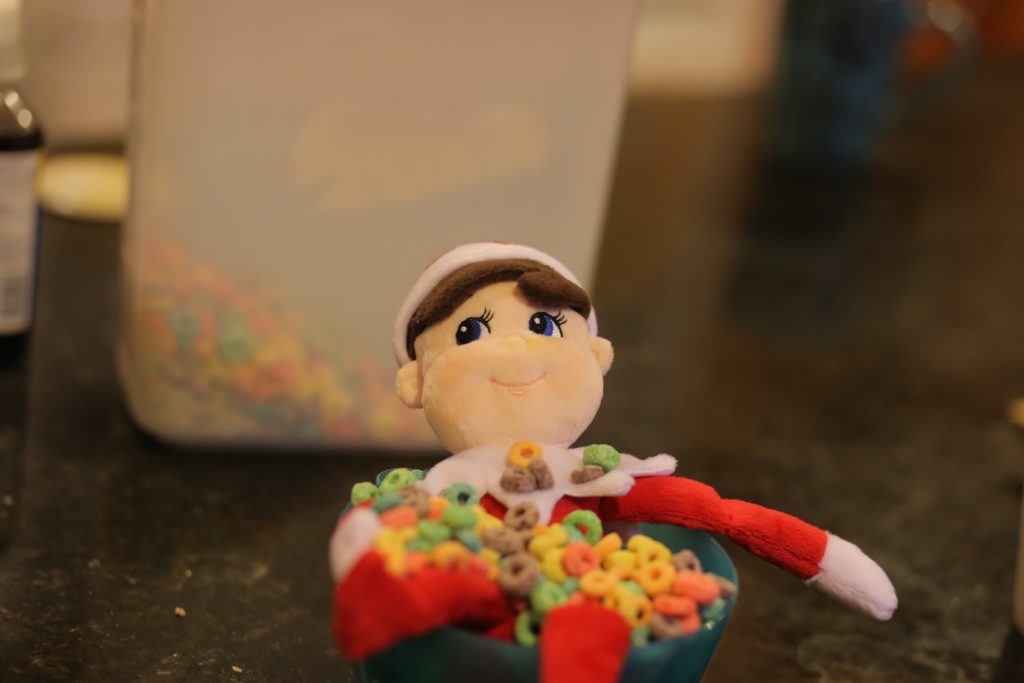 These kinds of crazy activities have become a new addition to my morning routine. I draw pictures on bananas. I set up fake Scrabble games. I stage dance parties in the Barbie dream house. 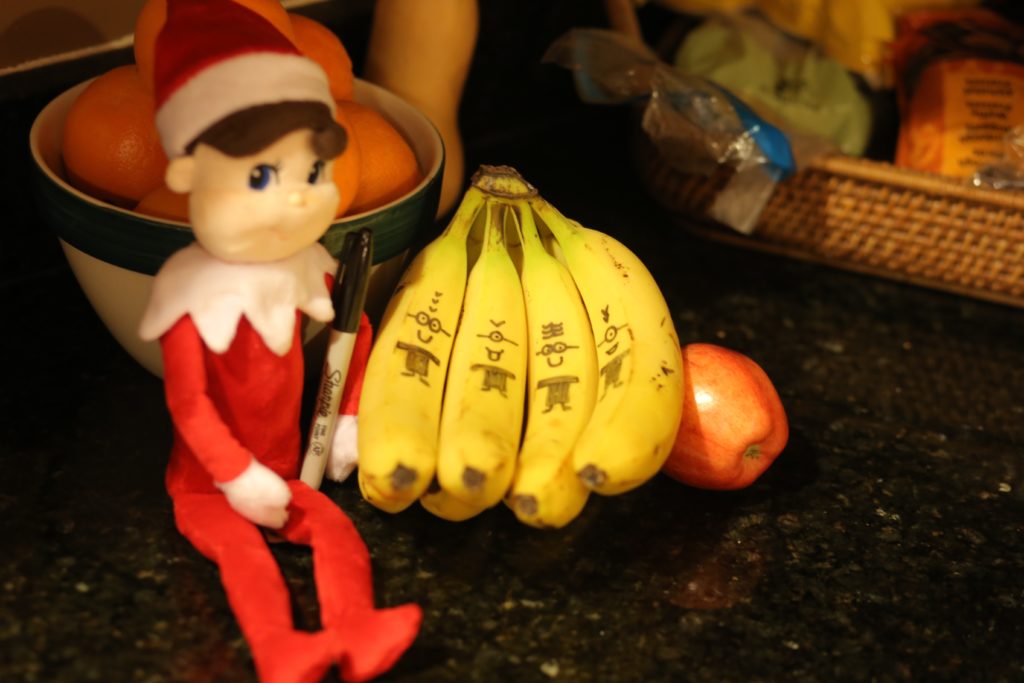 I’m somewhat embarrassed to admit to the world that I’ve become one of THOSE moms. After years of resistance, we have an elf.

I swore for years that this would never happen to me. I’ve always hated the Elf on the Shelf trend. It had to be the most heinous of all forms of distraction from the true meaning of Christmas. I have enough on my plate with four children, there’s no way I could take on the responsibility of setting up elaborate escapades for a stuffed elf. And… I know myself. If I’m going to do something, I’m going to go Pinterest crazy. I didn’t know if I could handle the pressure of being an Elf Mom. 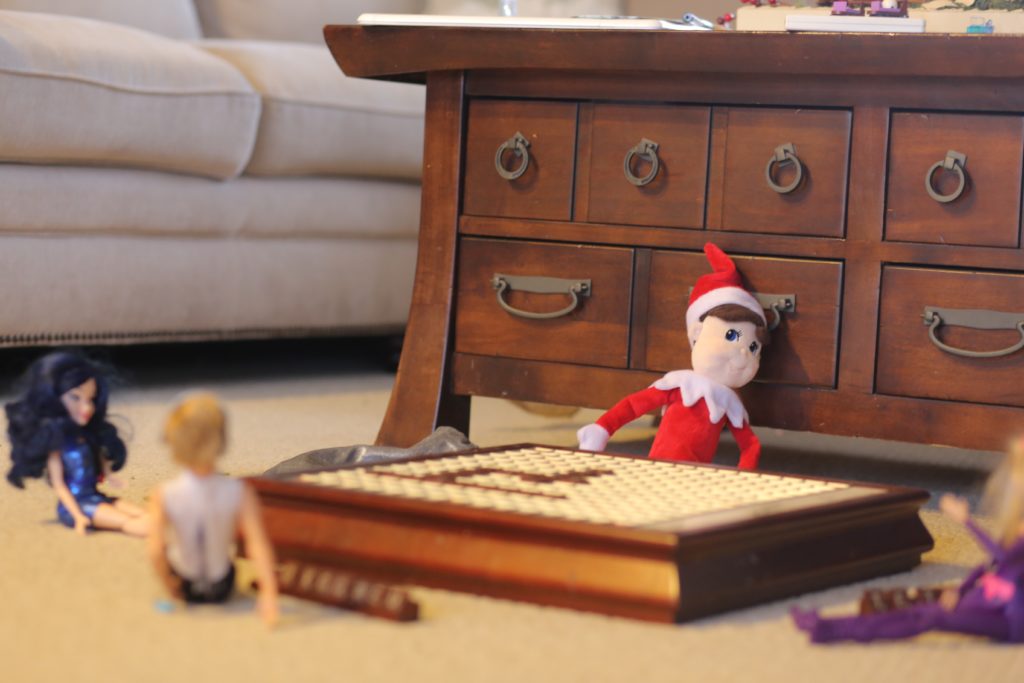 When the older three kids were little, I really didn’t have to worry about stuff like this. We homeschooled, and then they went to a private Christian school. They weren’t surrounded on a daily basis by kids who talked about Santa Claus or their elves in such a profound, this-is-reality, kind of way.

Then, our youngest went off to kindergarten at public school. When Dec. 1 rolled around, an elf came to visit her school. She had fun searching for the elf each day and seeing what kind of antics he had pulled overnight. But then the conversations began. Each child in her class would tell about what his or her elf had done that morning. Our little 6-year-old was stuck in the awkward position of trying to explain why an elf had not come to visit her home.

“Mom!” she would question each day after school. “WHY am I the ONLY child in my entire class who doesn’t have an elf?!”

I tried to compensate by moving her stuffed animals at night. I created elaborate displays of them playing games or dumping cereal on the counter or getting into other sorts of trouble. I was dancing on the edge of the elf trend, but refusing to jump in. My daughter gave a half-hearted smile at my attempts to fill the elf void, but it was never enough.

Still, the more pressure I felt to participate in this elf religion, the more I dug in my heels. We are NOT getting an elf.

Our daughter’s birthday is Dec. 1, so the next year, I was so focused on getting ready for her first grade birthday party, that I didn’t even stop to think about the elf. She came home from school that day, not full of excitement that it was her birthday, but crushed from hearing all of the stories of how everyone’s elf had arrived with great fanfare that morning.

Dang. I forgot about the elf.

December dragged on with more tales of the amazing, crazy and exciting things that were happening with elves in other people’s homes. I couldnt even muster the energy to move her Beanie Boos. No matter what I did to try to make the season merry, the elf tales hung like a heavy shadow over all my efforts. I couldn’t wait for December to end.

By the time Christmas came and went at our house, I knew one thing was for sure. On our daughter’s 8th birthday, she would be getting an elf. 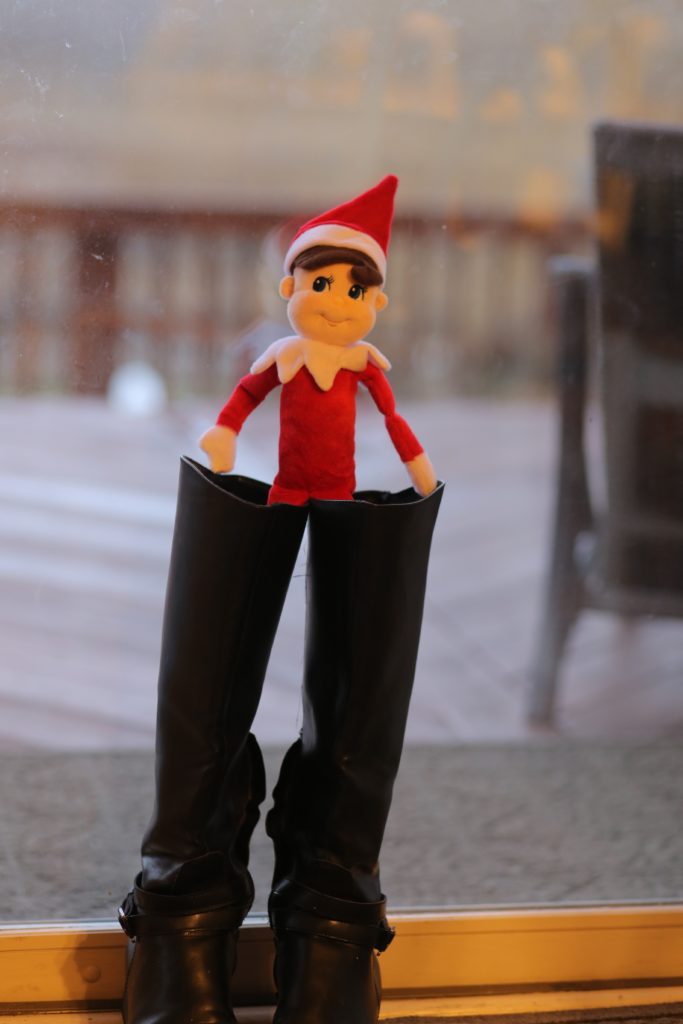 Our oldest son is a junior in high school this year. We only get one more Christmas with him living at home after this one. Seeing how quickly he has grown up has made me realize that some things aren’t worth fighting. These years are so short. Our little one will only care about an elf for a few more Christmases. Soon, I will be wishing she still cared about Barbies and Legos and elves. I know now how painfully condensed this short season of life really is. 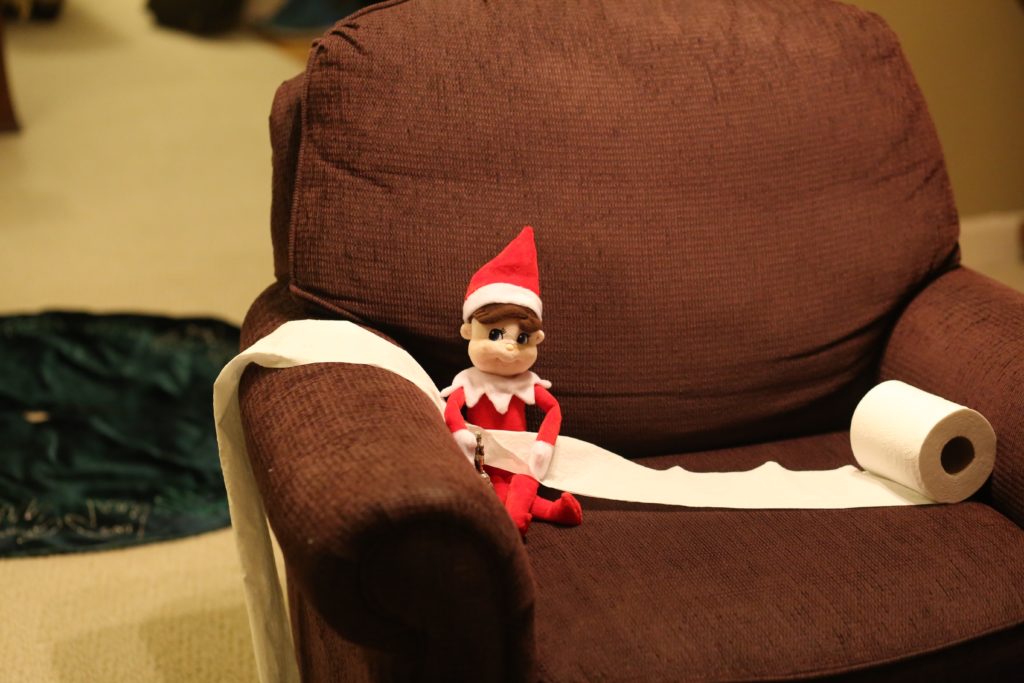 I would rather she have fond memories of her elf messing up the house all of December, than memories of being left out of every conversation because she didn’t have an elf.

If I hadn’t made up my mind already, my new position was solidified in late November. She was about a week away from turning 8. That is the age we had told her she needed to be to have a sleepover. She told us that her friends had invited her for a slumber party — not because she was turning 8. Nope. They wanted her to sleep over so she could experience the fun of finding their elves the next morning!! 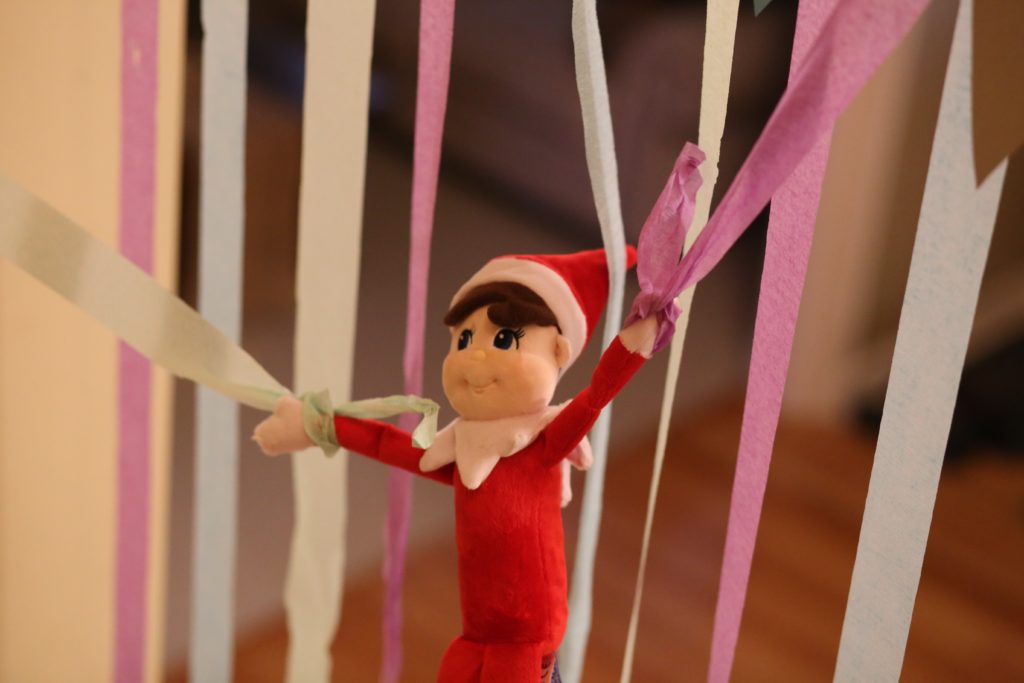 I have a tradition of decorating each child’s door with streamers and wrapping paper on the morning of their birthday. This year, I made sure an elf was part of the decor. She declared it the Best. Birthday. Ever. 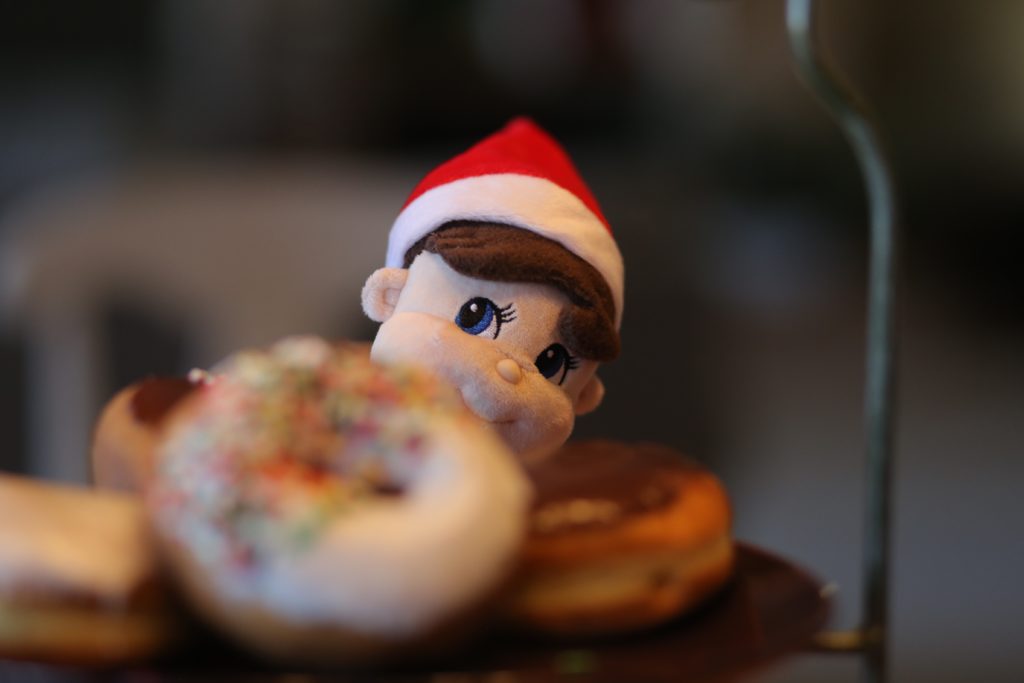 Having an elf IS a distraction from the true meaning of Christmas. But we spend lots of time talking about the birth of Christ and the things that truly matter. She knows how the elf moves at night, but she will never admit it. She staunchly obeys the rules of not touching the elf. She admonishes anyone who unknowingly tries to rescue the little stuffed guy from a bowl of cereal or being wrapped in streamers. She loves playing along with his silliness and searching for him the minute she wakes up.

My older kids aren’t sure what happened to their mom. They think the elf is ridiculous and can’t believe I’ve bought in. 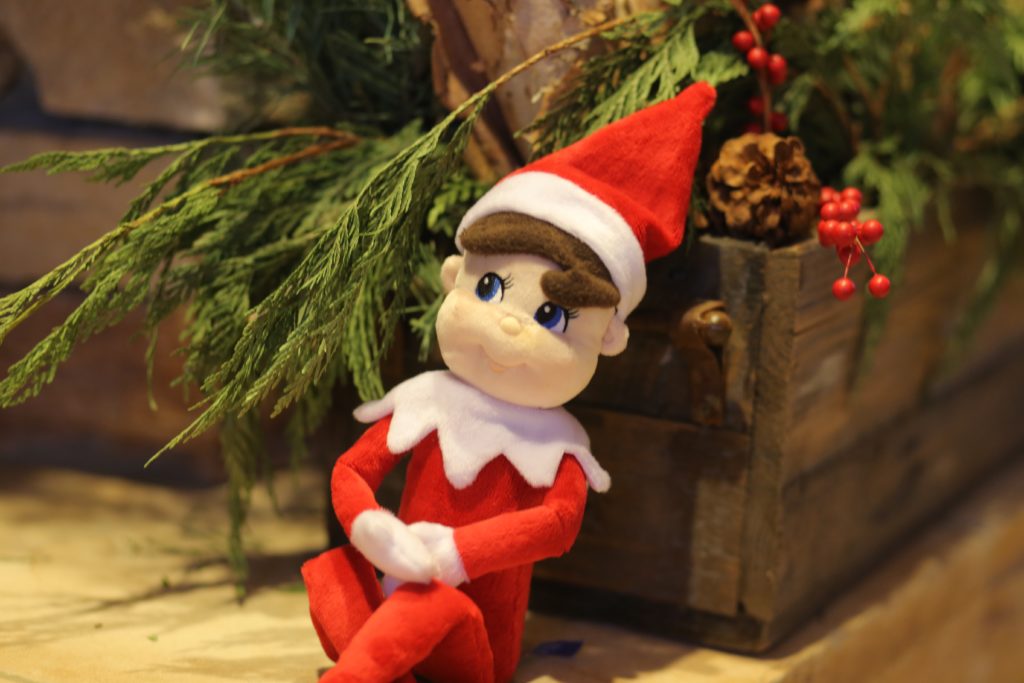 My husband has tried to move the elf a few times to help me out. He quickly learned that simply setting it on the fireplace isn’t enough. Our elf likes to have more fun than that! 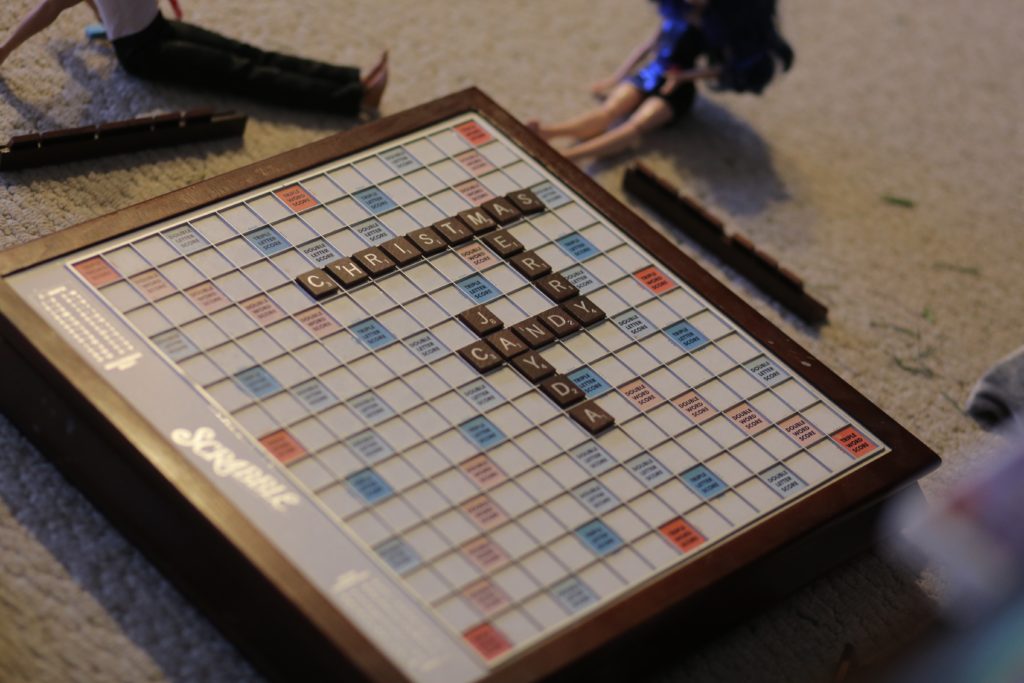 Well, it’s possible that I might be growing to like our elf. It turns out he hasn’t ruined our lives.

And yeah… I can’t wait to see what he does next.

So, what about you? What do you think about the Elf on the Shelf craze. Have you bought in? Or do you hate the pressure?