This is Part Eight of my story. If you are just starting to read, please go back and start with:

Part One: A new view of food

Part Two: The start of my journey

Part Seven: What do we eat?

A few months ago, I got into a battle of wills with a muffin.

I had been making a big batch of gluten free muffins each week for my kids to eat for breakfast as they ran out the door for school. The muffins contained gluten free grain, milk, eggs and chocolate chips. I don’t know if I have a sensitivity to any of these foods, but they are all ingredients that I don’t eat on the AIP diet.

I have gotten to the point that most of the time I’m fine around food I can’t have. It’s like I have a switch in my brain that I turn off, and I don’t even consider eating so many of the foods around me.

This time was different.

“You could eat that a year ago, and you were fine,” I told myself. “Come on! You would have considered this ‘healthy’ in the past.”

“No one will even know… you don’t have to tell your family… it smells so good.”

I couldn’t take it.

I ate the muffin.

I knew almost immediately that I had made a terrible choice. My digestive system started hurting. The symptoms grew worse during the next few days. I was sick for almost a week afterward. The worst part is that because the muffin contained so many ingredients that I have eliminated, I didn’t know which one had caused the problem. This is what NOT to do when reintroducing foods.

It was a good reminder to me how much of this journey with food is really in my head. All of the choices I make about what to eat are just that… choices. I don’t have to be on this extreme anti-inflammatory diet. I can veer off course “once in a while.” But I’m also the only person who has to deal with the consequences. I can choose to eat food that will make me feel my best. Or I can choose to eat what sounds good in the moment.

It’s been a year almost to the day since I crashed. I guess it’s fitting that on the anniversary of the start of this journey, I’m heading to the Celiac Center at the University of Chicago today to see a specialist.

Here’s what I know going into the appointment:

I guess I’m a bit of a mystery to my GI doctor. His analysis of these mixed findings is that he doesn’t know how to interpret them. He wants me to go to the Celiac Center to get advice from the specialists there.

Even though it’s weird to hear my doctor say he doesn’t know how to interpret my test results, I do know how far I’ve come in the last year. A year ago, both my husband and I collapsed on the exact same day. He was in the emergency room getting an ultrasound because he suddenly was experiencing double vision, an extreme headache and eventually reduced vision in one eye. We found out after a week of tests that he has a very rare condition that causes bleeding in his retina.

I was so focused on taking care of him, that I ignored my growing GI distress. I assumed that my diarrhea, exhaustion and fatigue that all started the same day were caused by the stress of his eye problem.

When I look back at all that has happened since then, I’m so thankful for how far we’ve come. My husband’s vision hasn’t returned completely, but his retina problem is under control. I have an amazing GI doctor and dietician who have helped me so much this year. My family has been a huge support to me. I know that tons of people are praying for me.

I get to eat an incredibly healthy diet. Before I got sick, I could go weeks without eating a fruit or vegetable. I basically lived on bread, pasta, cereal, oatmeal, yogurt and a list of other foods that I don’t even touch these days. It’s strange that during a time when I’ve been so “unhealthy,” I’m also the most healthy that I’ve ever been.

I’ve also learned so much about taking care of myself. I know now that it’s more than just food that I have to watch. There are so many other factors that will keep me operating at my best. Managing my stress level and getting enough sleep are key. I have found that when my stress is low and I’m getting plenty of sleep, I can be more flexible with my eating. When I’m eating perfectly, I can handle stress better or lack of sleep.

My spiritual life and being part of a community are essential. When I feel wiped out and just want to hide in bed, it’s better for me to get outside, do something creative or have a conversation with someone.

These are all simple choices, but they can seem so difficult in the moment.

How do I feel a year later? I haven’t felt great most of 2017, but the last 10 days I’ve been symptom free. I know that I can have a “flare” even when I’m doing my best to do everything right. So, I have learned to enjoy every good day.

When I wrote this blog post a few weeks ago, I will admit that I was feeling crushed. Now that a few weeks have gone by, I would describe myself as hopeful.

I have my moments when the desire to eat a muffin feels so intense that I convince myself I don’t have a choice. But I know now that the choices I make every day have a major impact on how I will feel. 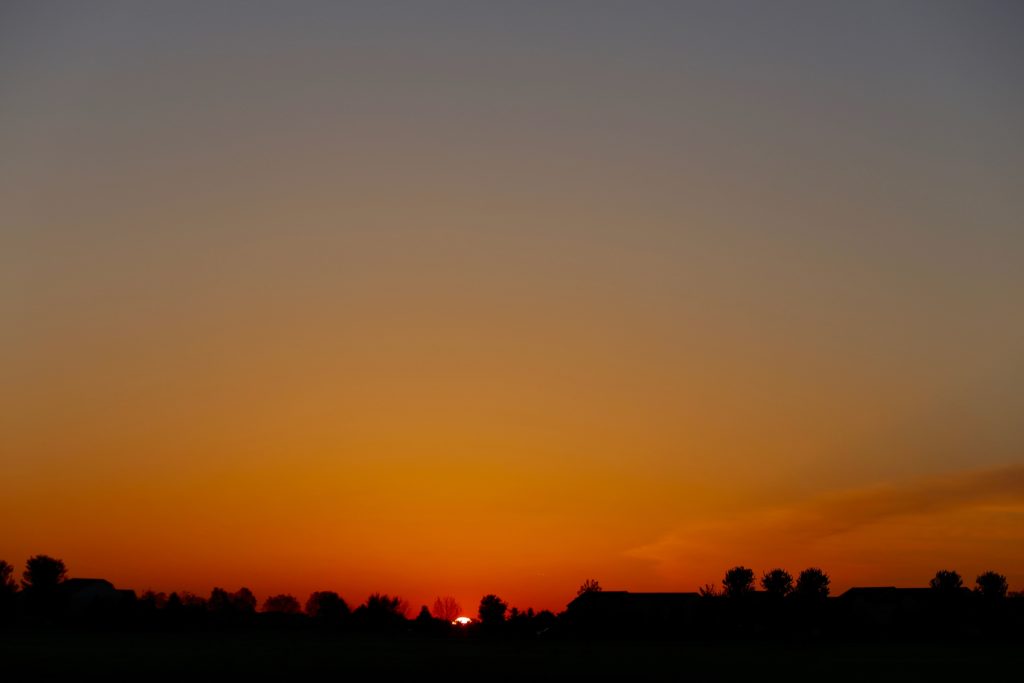 I went for a walk early this morning as the sun was rising and thanked God for the past year. It’s definitely been a journey, but as the sun came up I felt the hope and promise of a new day.

Thanks so much for reading! Leave me a comment and let me know you stopped by!