One of the great joys of watching our kids become teenagers is seeing them grow in their gifts and talents. When they were little, it seemed we were always trying to give them opportunities to experience new things, whether it was a sport or an art class or a chance to learn a new skill.

As they make their way through junior high, and now high school, it’s been fun to see them start to settle in and take ownership of their gifts. All four of them (including the first grader) are great about regularly practicing their creativity, without being prodded by their parents. After school around our house often looks — and sounds — like a drum solo emanating from the basement, girls doing backflips on the trampoline or choreographing a dance in the living room and someone walking around with a video camera, excited about his next idea.

This past month was a floodgate of creativity at our house, so I decided it was time to write a super braggy mom post about all that’s been happening.

All three of our older kids got to participate in an annual talent show for the youth at our church. But this isn’t an ordinary talent show. They are put together in teams with other kids their age, and they have to draw a card with the type of act they have to perform. They get about a month to work on their idea.

Our 14-year-old was especially excited about his group. They were supposed to perform a song, and I knew that because of his passion for drumming, he had encouraged his group to do something that involved using buckets for drums. 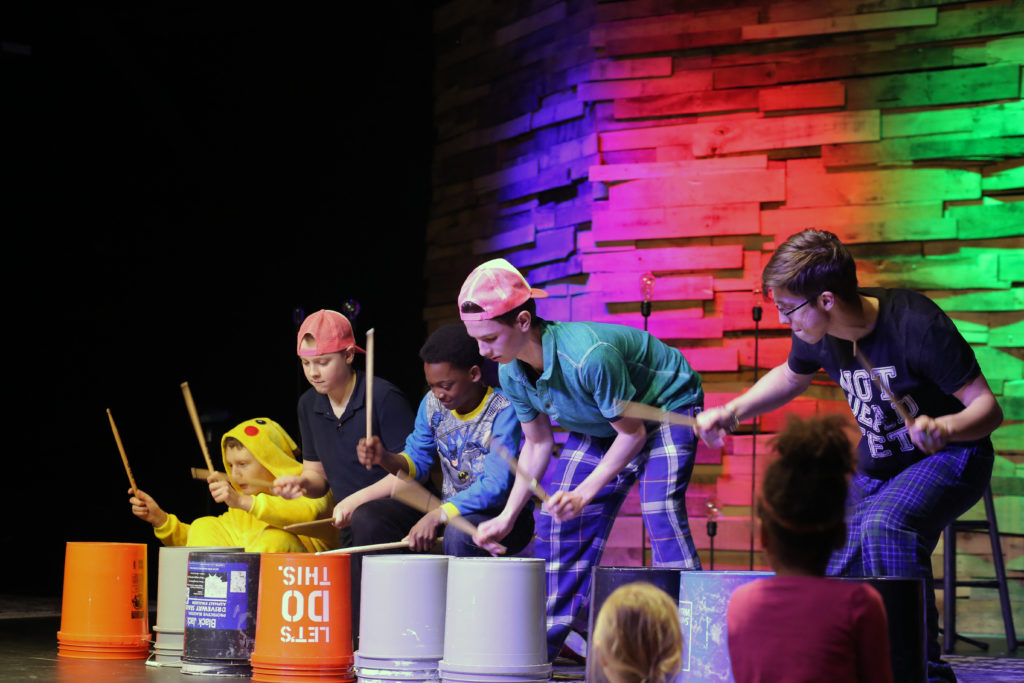 Parents aren’t invited to the show, but I got to attend because I needed to take photos for the church. About 30 seconds into his act, I realized I better pull out my cell phone and also take video. This was really funny!

Check out his performance here:

At the end of the evening, all of the students voted for the acts in three categories: Best displays the theme of “Bold Love,” Best Teamwork and Best Overall Performance. After watching all of the acts, I was confident he would probably win at least one prize. However, I think we were all shocked when his group won ALL THREE awards! So. Fun. 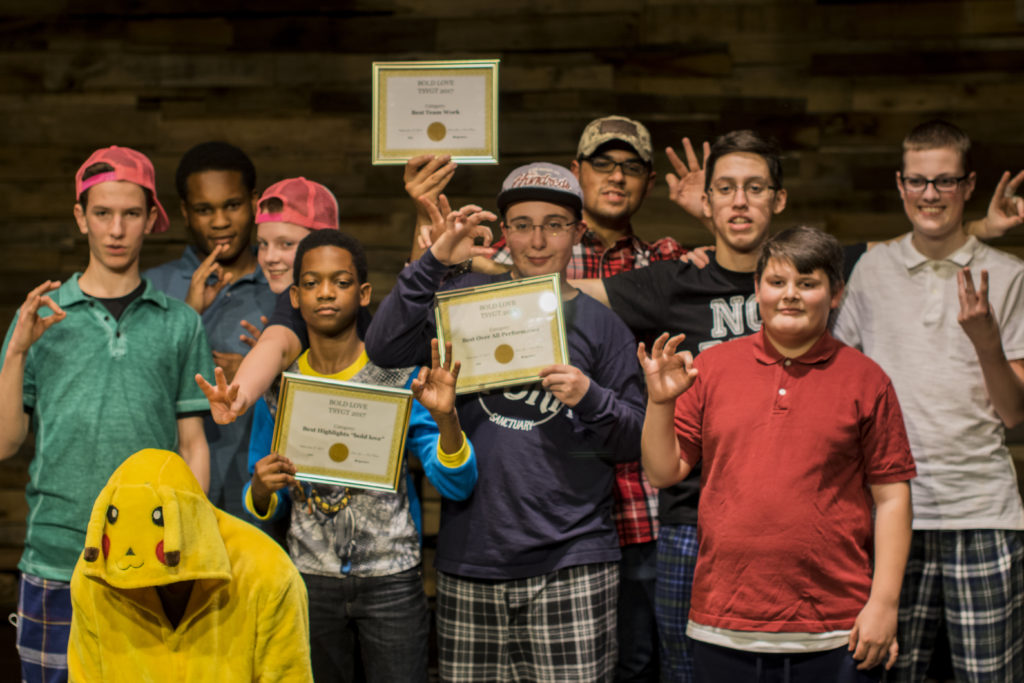 In addition to his bucket drumming skills, he got to perform twice this month with his percussion ensemble at school and also gets to play as part of the youth worship team at our church on Monday nights.

I also loved the performances by our other two. Our seventh grader helped choreograph a dance for her group of 6th and 7th grade girls. 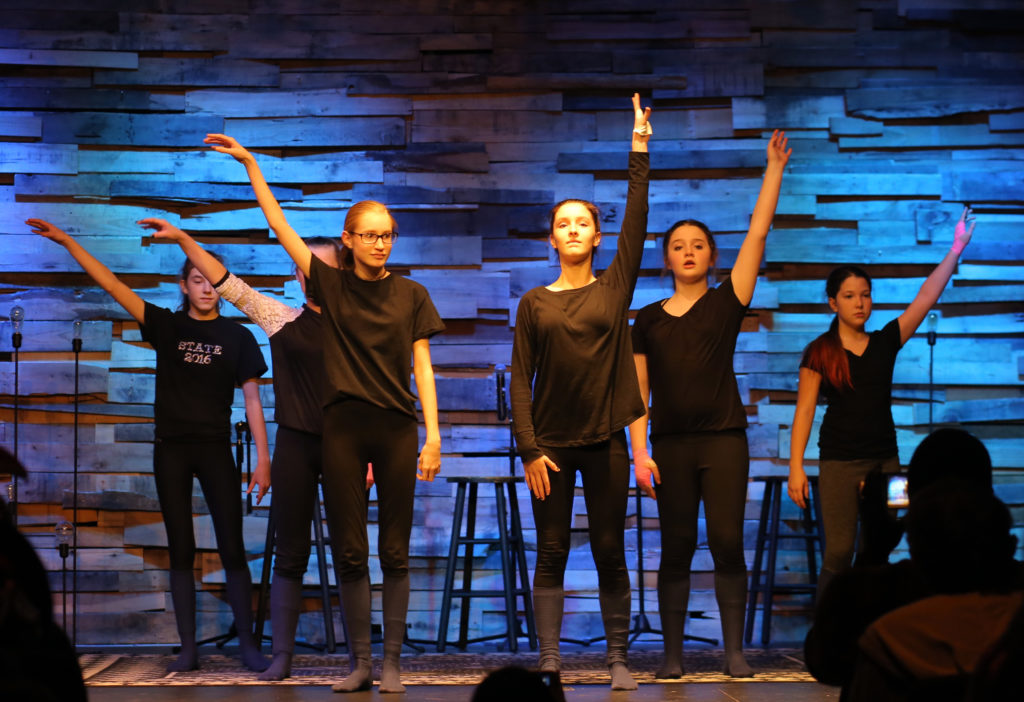 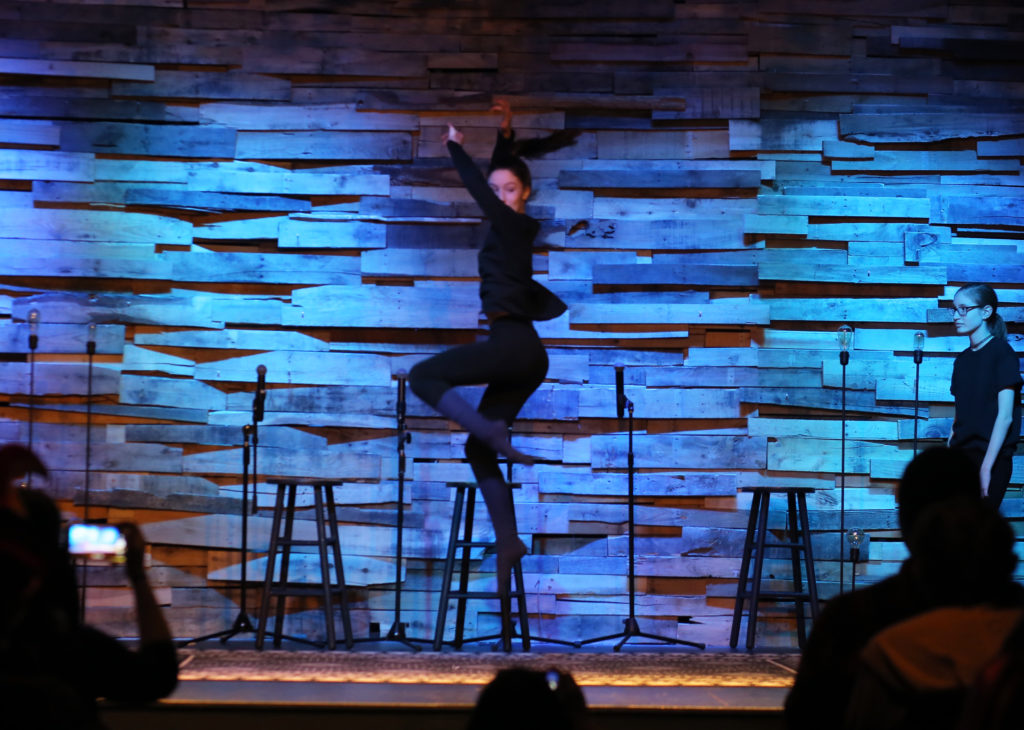 Our 16-year-old and his team had to do a rap song. While our other two kids practiced for weeks, they literally put their act together about five minutes before the show. They were still one of my favorites. They simply had so much fun performing! 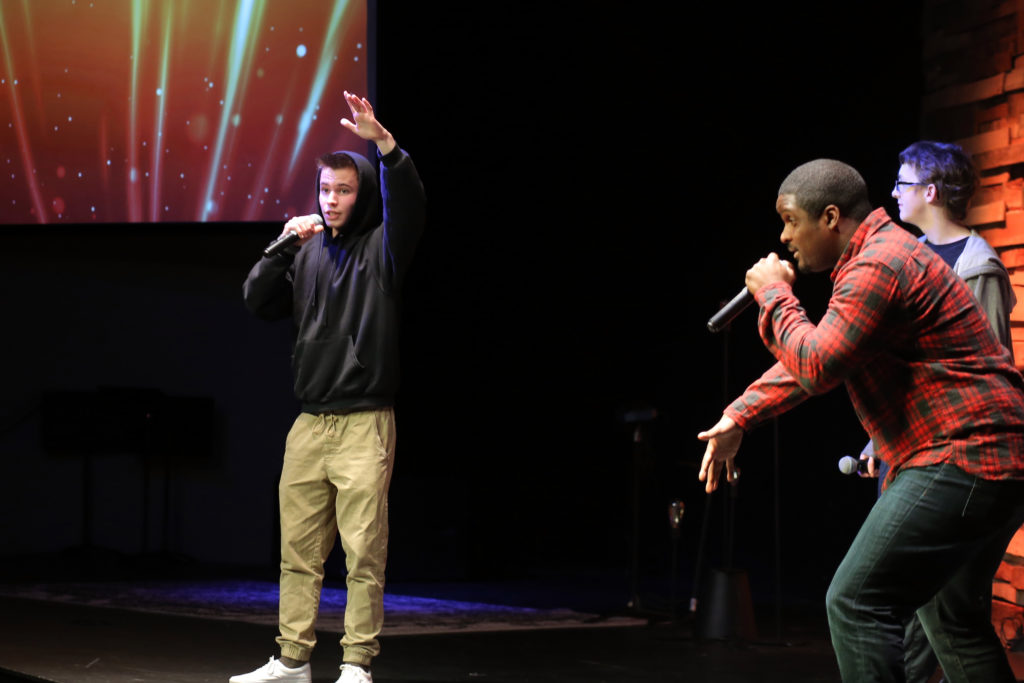 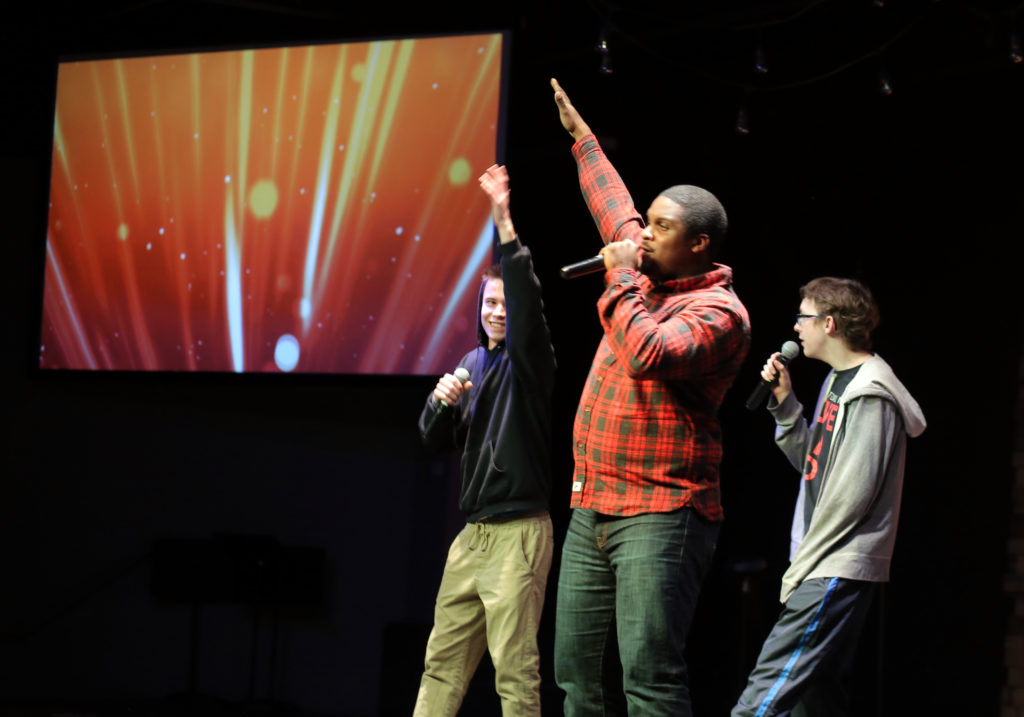 Earlier in the month, our oldest son got to perform in two other amazing ways. He had been working for about two months on a short film that he entered in his high school’s first ever Film Fest. All of the entries had to display the theme of the year, which is “The Best Day Ever.”

He took a serious approach with his positive message of how a student stood up to a bully to find her best day ever. He wrote, directed, edited and produced the film, which won second place. He was so excited, especially since his film was up against those of several junior and seniors. The big thrill for me was reading through the comments of the three judges, who are professionals in the film industry. It was amazing to read their (mostly positive) critiques of his talent.
Check it out here:

As soon as the Film Fest was over, his mind was already racing with his next short film. He enlisted a couple of friends as actors and filmed another one the very next day!

He also made his high school acting debut in February in the freshman-sophomore play. The play was a series of short stories written and directed by the juniors and seniors. He had a blast, and did a fantastic job in his performance. 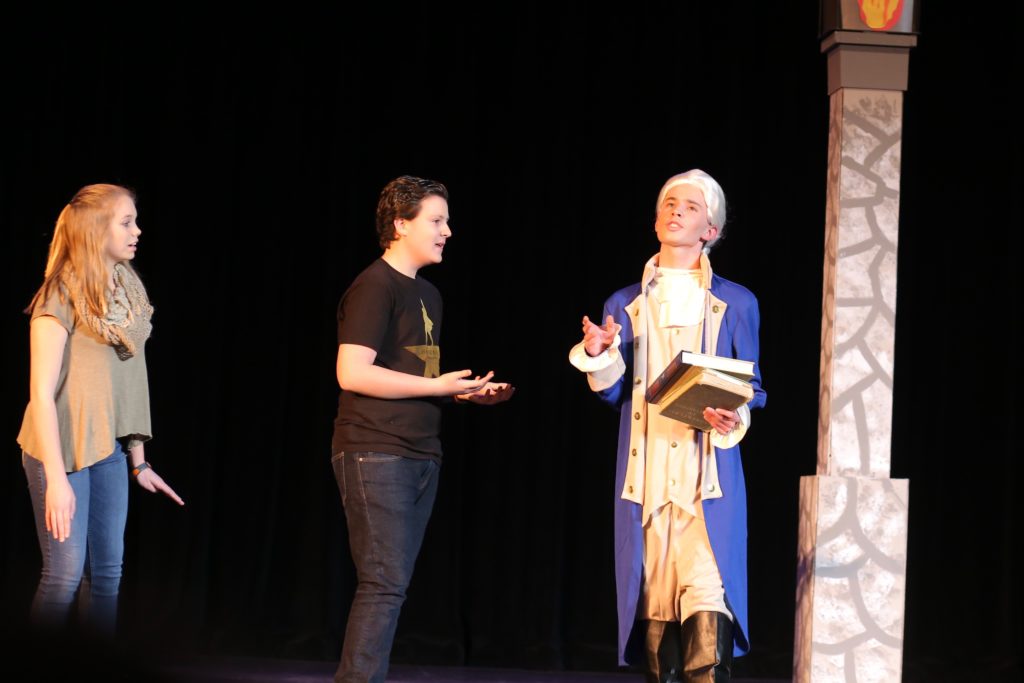 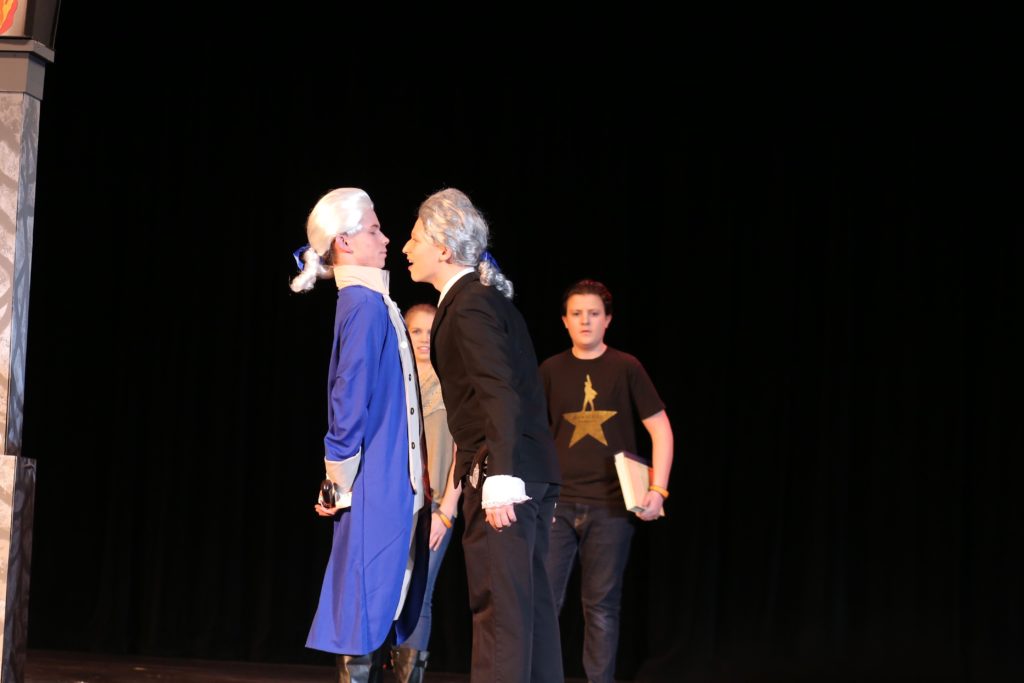 Our 12-year-old daughter has had some downtime, now that cheer season is over. However, she also has been really growing in her music ability, playing the flute. We got to watch her perform last night in one of her last concerts of the year, and it was amazing to see how far she’s come since starting band last year!

She also got to be in the spotlight for her performance in her brother’s film. On the night of the Film Fest, all of the directors and actors were invited to dress up like they were going to the Academy Awards. The girls and I had a blast getting dressed up for the show. 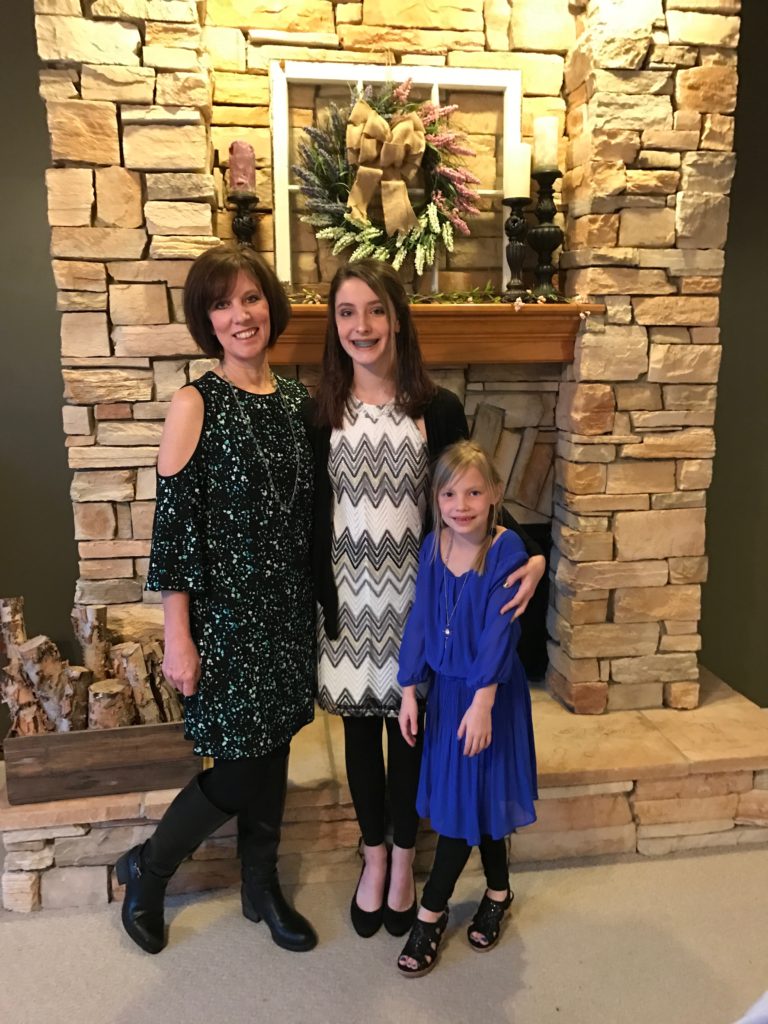 That brings me to our little one. She is still hard at work doing gymnastics five hours a week. But she also has been trying some new things this winter. She started a tap class, and she also is taking an acting class on Saturday mornings. Of all the things she is doing, she has decided acting is her favorite! We get to see her class perform a very condensed version of The Little Mermaid in a few weeks.

Well, my blog was starting to sound pretty dull the past few weeks since all I ever talk about is what I’m giving up and what I’m NOT eating! I thought it was time for me to record some of the other exciting stuff happening in this crazy house full of kids and their creativity.

Have a great weekend!