A few weeks ago, I came home from a long day, excited that dinner would be cooking in the crock pot. When I walked in, I was confused to find all of the liquid from the crockpot in a puddle on the floor. My crockpot had cracked. It was dead.

This might not be a big deal to some people, but my slow cooker is the closest thing I have to a personal chef. When I’m organized, I use it several times a week to prepare dinner while I’m at work or running the kids from one activity to the next. The six of us consume a large amount of food on a daily basis, and the crock pot is my secret weapon to keep us well fed.

Since the crock pot’s death, I have been contemplating how to carry on with dinner as we know it. I actually love spending a Saturday putting together crock pot meals in freezer bags so I can quickly get dinner started before leaving for the day. I wasn’t sure how many more weeks we could survive without my trusty slow cooker to help feed my hungry family.

However, I also didn’t want to rush out and buy a new one because I had become fascinated with the idea of buying an Instant Pot. My friend — also named Emily — had been posting on Facebook about her new Instant Pot. Even though I didn’t really know what it was or what it would do, I was pretty sure I wanted one. I started doing some research and realized this would have to go on my Christmas list. I wasn’t ready to spend $100 on an appliance for myself, even though I knew it would be well used!

Then, last week, I sat down at my desk and saw a $100 bill tucked under my computer. I had been hiding last year’s Christmas money for just the right moment when I really wanted to buy something for myself. This was it!

I have now been cooking in my “Instant Pot” for more than a week. Actually, that is the brand name for an electric pressure cooker. I bought mine at Costco, and it’s called a Power Pressure Cooker. 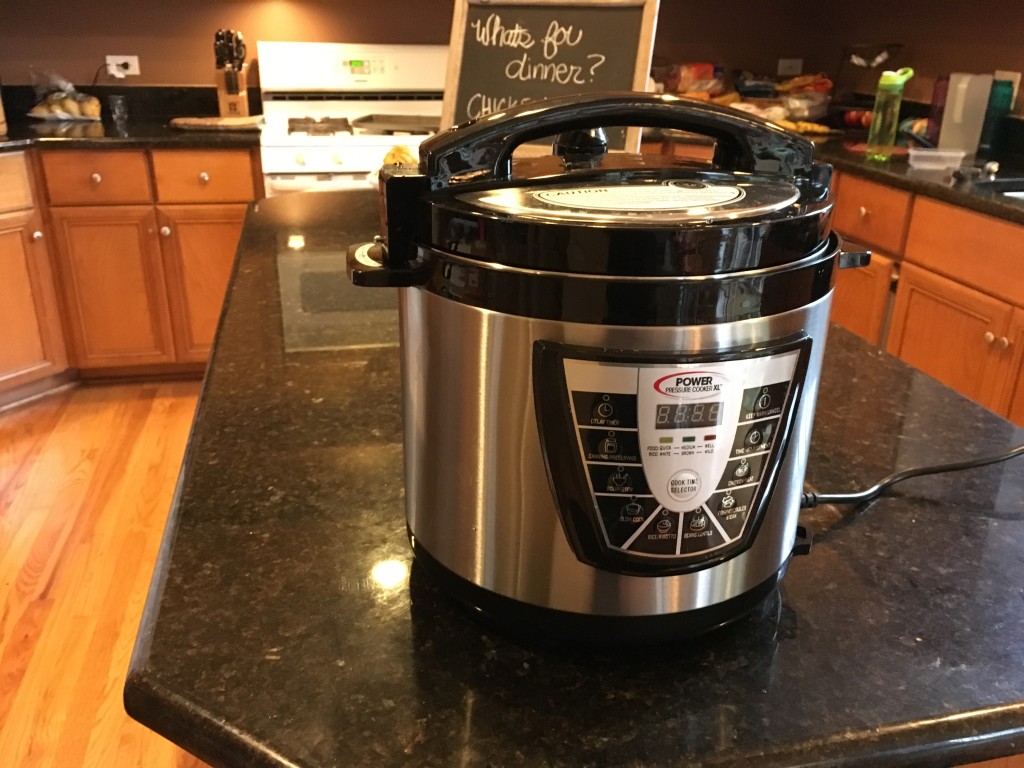 I found out quickly that a pressure cooker is totally different from a slow cooker — although I made sure the one I bought had a “slow cooker” function. This thing has taken over all of my dormant brain cells trying to figure out how it works. Here are a few things I’ve learned so far:

So far, in addition to the items mentioned above, I’ve made chili, chicken breasts, and beef with potatoes and carrots. Unlike the crock pot where meat can end up like mush, my beef actually came out with a bit of pink in the middle.

I still miss the slowness of my crock pot. I got in the habit of putting in dinner in the morning and enjoying the smell of it cooking all day. I haven’t tried the “slow cooker” button yet, but I’m really hoping it works. On the other hand, I love being able to throw together a meal quickly when I don’t have time to put it in the crockpot before I leave in the morning.

If you want to see a hilarious video of what happens when you release the steam, here’s me freaking out that my kids will burn their hands…

How about you? Have you ever used a pressure cooker? Do you love your crock pot?