On Columbus Day, our family visited a giant corn maze that is a few miles from our house. The first time I took the kids there six years ago, the three older ones were 9, 7 and 5, and I had no idea what I was getting myself into. I gave them my no-fail instructions for conquering any maze. Just stay to the right, and we’ll find our way out.

Within a few minutes, I realized this was not going to work. The maze had twists and turns and paths that divided in three directions, and then three more directions. We had barely started, and I was starting to panic, wondering how I would get these three kids through this convoluted maze. I remembered seeing people picking up a sheet of paper back at the entrance. I wondered why they would want to carry a coloring sheet through the maze. Now, I realized that detailed photo wasn’t a coloring page. That was the MAP! And those lines weren’t the outlines of a photo. Those lines were the PATH!

They had actually carved an intricate design into a field of corn. There were six checkpoints hidden throughout the maze, and we would need to walk along the outlines of the design to find them.

Once I got a grip on the rules of this challenge, I loved every minute of it! I’ve always loved solving a puzzle, working my way through a maze or following a map. Finding each location and stamping it on our sheet was the next best thing to finding our way to a hidden treasure.

Since then, we’ve spent many Columbus Days at this particular corn maze. My husband had the day off work this year, and we didn’t think we were going to be able to go. But the stars aligned and by mid afternoon, we were able to take a quick trip for our annual maze adventure. 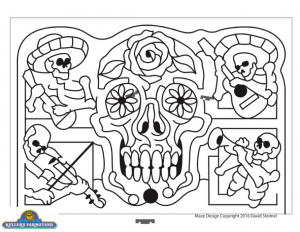 This year, the farm had created three mazes. We made our way through the first and easiest one together as a family. We took turns giving different children the role of navigating us through the maze.

The second maze was much larger and more detailed. This time we decided to split into teams and see who could find all of the checkpoints and finish first. 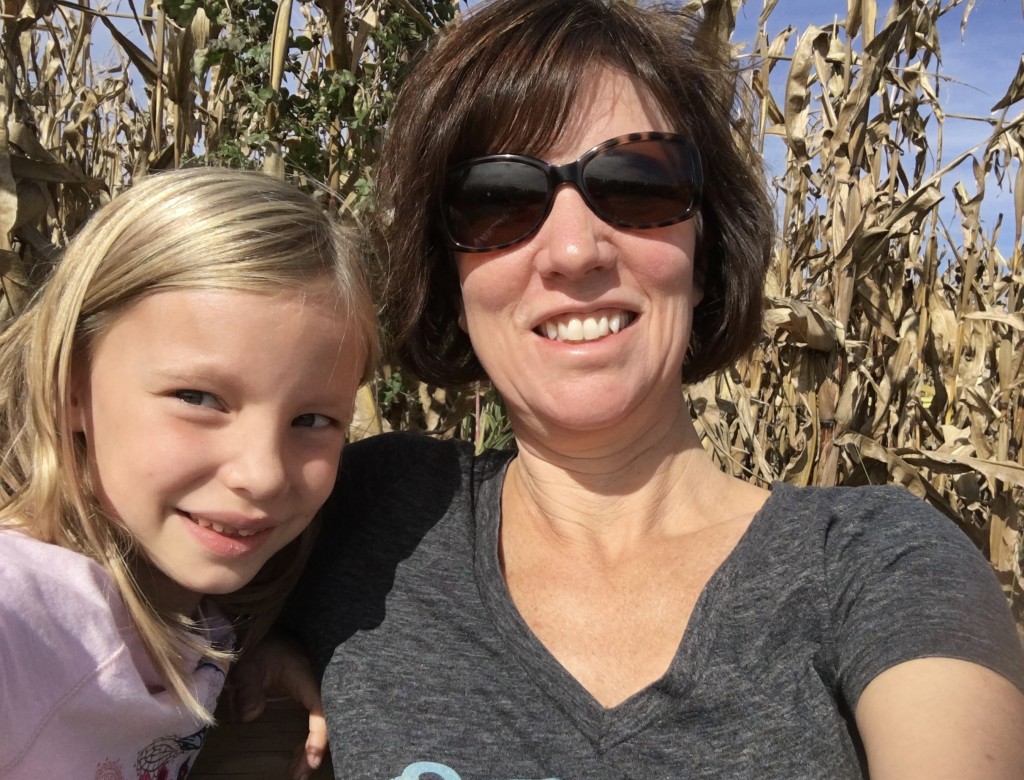 Our 6-year-old daughter and I quickly formed the first team. We are both highly competitive and love puzzles. We both struggle with perfectionism, so we knew we could count on each other to give this our all.

Our 15-year-old  son asked if he could go with our 12-year-old daughter. He knew that map reading wasn’t his strength, and he should team up with his sister who had proven her map reading skills in the smaller maze. She also tends to make every adventure more fun with her crazy sense of humor. Even if they didn’t win, these two would have fun together.

That left my husband and our 14-year-old son to form the last team. My husband was the only one in the family who hadn’t even bothered to pick up a map. And our second son is highly analytical and competitive, but also enjoys just hanging out with his dad. They are the two that could sit out in the middle of a field and talk for hours. They can forget about schedules and bed times and routines, as long as they are engaged in a good conversation.

Off we went. My Mini Me and I got off to a running start, map in hand, analyzing the best route. Our first objective was to lose our competition and keep the others from simply following us. Our focus and drive served us well, and the 6-year-old and I made it through the maze before anyone else. Three minutes later, out came our oldest son and daughter. We all sat on a bench goofing around for another 15 minutes before the last two meandered out. They didn’t seem to care much that they were last or how long we had been waiting. They had talked about drum sets and baseball and managed to unpack a few burning questions about life while roaming around the maze.

As the kids have gotten older, I have started calling these types of family adventures #forcedfamilyfun. The kids usually protest when I tell them my plans to go somewhere just as a family without any friends. But they also usually end up having fun. I assumed that after two mazes, I had pushed my limit on forced family fun, and we would be ready to head for home.

Much to my surprise, the entire family wanted to do the third and most challenging maze. In the other two mazes, the checkpoints were marked on the map. Each station came equipped with a paper punch hanging from a string that you would use to mark your sheet. In the third maze, the checkpoints weren’t labeled on the map. We would need to find them just by wandering through the maze.

Also to my surprise, everyone wanted to stick with the same teammate. No one wanted to reshuffle just to improve their odds. We all enjoyed the first experience and were ready to try again.

We all headed in. I did my best to keep my eyes glued to the intricate map so I could see where we had been. I walked with it right in front of my face and turned the map as we turned. We found our first checkpoint, but then I quickly lost track of our place on the map. We both started to panic. It was hot, and we were thirsty, and I was certain we were going to die. After what seemed like 100 hours of aimless roaming in the dessert, we found one more checkpoint. We both looked at each other and said, “We’re done. Let’s try to find some sign of civilization and get out of here.”

We wound our way through the maze until we could hear the sounds of people talking. We sprinted toward the sounds and rushed out of the maze. We breathed a huge sigh of relief that we had survived. We headed toward a play structure and looked for the others. A few minutes later, my husband and son came out. I was sure they had given up, as well. About 10 minutes after that, Team Two, our son and daughter emerged. They said they had found four of the six checkpoints, so we declared them the winner.

We all happily headed toward the snack bar and bought apple cider donuts and caramel corn. As we headed to the car, we asked my husband how many of the checkpoints they had found. “Oh, all but one.”

So, it turns out the laid back relational team that didn’t even want to pick up a map were the winners when the challenge involved roaming around aimlessly. Apparently, the map actually made the challenge harder for them. They seemed to have some inherent sense of direction that was impaired by trying to look at a map.

The middle daughter and oldest son could use their fun-loving spirits and goofy personalities to keep their cool and still come in second place, with or without the checkpoints on the map.

And my overachiever daughter and I? We could only survive with the written guidebook and carefully sketched out plan. We could follow the map with ease, but had a panic attack at the thought of wandering around without directions.

I’ve been analyzing this scenario all week, trying to find some important statement I learned from this experience. I don’t really have one. But it was a great reminder of how we are each uniquely made. We all brought a different set of skills to this adventure. Some of us are great at navigating. Others keep us laughing. And others are there to talk and listen. Put them all together, and you have an amazing thing called family.

How about you? Are you the expert navigator? The fun loving adventurer? Or the laid back wanderer?