It’s been such a mild winter so far, but back in November we had a nice snowstorm. Normally, I wouldn’t have even gone out that day. But the girls and I are devoted shoppers. So we headed over to our church for our annual fair trade shopping event, Hope for the Holidays.

By the time we were coming home, the snow was falling in big wet flakes. The roads were a mess, and the snowplows hadn’t touched the country roads we take back to our house. We were taking our time driving home, and the girls were anxious to get out of the weather.

On the other hand, I was doing my usual thing. I was scanning the beautiful scenery covered in fresh-fallen snow. The air was thick with snowflakes. Everything was covered in white. That’s when I spotted the red barn. It looked so peaceful and bright in contrast. 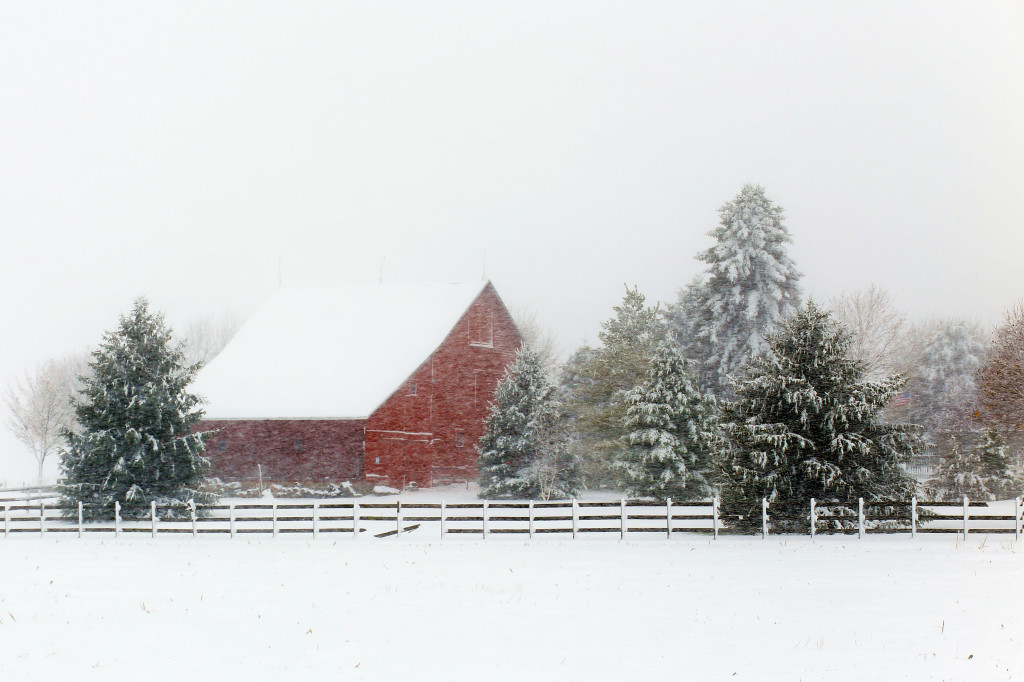 “Do you mind if I pull over for just one second,” I asked the girls. “I have to take a photo of that barn!”

I kept driving. It was about four more miles to our house. I dropped them off with their dad, but I couldn’t stop thinking about that barn. I just had to go back for one quick photo.

The snow was falling so hard now that I was the only one who seemed to be driving anywhere on that Saturday afternoon. I stopped my van right in the middle of the country road, stuck my camera out the window and snapped a photo. Then I turned around and drove back home

A week later, I noticed that the U.S. National Weather Service was having a photo contest. My friend, Cheryl Lynn, had actually told me months earlier that I should submit my photos to the weather service contest, so I had liked their page. But I didn’t take the time to figure out when the contest was held or how to enter. On this particular week, they were posting the results of that week’s contest, which had just ended.

I sent a note asking how to enter the contest, and uploaded my barn photo to their page. I didn’t realize that by uploading the photo, I was entering the next week’s contest. I had simply meant to share it with other weather geeks like me. I actually thought it was too late to enter since I had taken the photo the previous week.

A week later, I didn’t notice the next contest had begun. And I didn’t notice my photo was included. I didn’t even know they were having a new contest until Sunday night when a friend posted on my FB wall a notice saying I had won! The “award” for winning was that my photo became the cover photo for the U.S. National Weather Service’s Facebook page.

My husband and I were cracking up that evening after it was posted. We both sat with our phones in our hands, watching people like and share my photo. By the next morning, it had gained more than 2,500 likes. I know that doesn’t even come close to the world’s definition of “going viral,” but it was the closest I had ever come. More than 150 people had shared my photo and dozens more left me nice comments.

That was early December.

This week, the U.S. National Weather Service announced that all of the winners of the weekly photo contests from 2015 would go into a contest for Photo of the Year. I didn’t think my photo had a chance of making it past the first round of 52.

Over the past few days, I’ve watched as my photo made it into the second round of the 20 top vote getters, and then into the third round of the Top 10. Today it made it to Round Three, the Top Five. In each round but the first, it has been the second most liked photo.

I realize this isn’t a prestigious photo contest with professional entries and a big prize. But it has been so fun for several reasons.

1. I love the way my simple photo of a barn in a snowstorm has touched people’s hearts. Even by my own standard, my photo lacks glamour. It’s been up against gleaming shots of the the Chicago skyline. It’s stood up against the blood red moon by Navy Pier. And it’s outlasted menacing storm clouds and amazing sunsets. People have left comments saying they feel like the photo is a slice of Americana. It takes them back to another time or reminds them of home. It makes people feel good.

2. I’ve been blown away by how so many friends have shared and liked my photo. At first, I thought it was kind of annoying that the contest was based on people voting. I didn’t want to ask for votes. I just wanted people to like it if they really liked it. But then so many friends started sharing it, and their friends would share it. It has been so fun just to see so many people get behind that little red barn. Honestly, seeing my friends get involved has been more fun than the contest itself.

3. I’ve really been proud of that little red barn. I didn’t even notice at first the broken rail on the fence. Or the American flag blowing proudly in the wind. I drive past the barn almost every day, and to be honest, I don’t even give it a second glance most days. But on that particular snow-covered day, that barn was showing off her beauty. It makes me feel great that I got to show that to so many people.