A few weeks ago, our seventh grader found out that he needed to do a presentation for his science class on one of the systems of the body. The students in the class were divided into pairs and then each group would randomly select a system to present. They had to come up with a creative way to teach that system of the body to the rest of the class.

When my son told me about this, I was nervous for him. Oh how I hoped he would get a good system. Let’s face it, when you are in seventh grade, certain bodily functions are just a little more difficult to talk about than others!

He came home a few days later and told me he had been given his system. The Endocrine System.

OK. How bad could that be?

The students were challenged to do a 3-D visual presentation. In other words, no pasting photos on a posterboard. It needed to be more creative.

I immediately started encouraging my son to use this as an opportunity to have some fun with his project. His passion is making movies, and this would be a perfect opportunity to put his movie-making skills to good use. At first, he was was adamant he would find another way.

But on Friday, he was finally up against a deadline of having his presentation ready by Monday morning. He had been researching the Endocrine System, and we both agreed that creating a visual for how your glands secrete hormones and how those hormones travel through the body and how those hormones affect certain parts of the body really was not going to be the easiest thing in the world to explain. I mean really, how do you make a clay sculpture or some other visual of your glands and hormones?

He had the day off school on Friday, and by Friday afternoon, he was starting to agree that a movie might be the way to go. He has made dozens of movies over the past few years, and he has done several in the past using a green screen to create special effects. We started talking about how he might be able to use a green screen to make it look like he was actually inside the human body.

Fortunately, I have been playing around with a green screen for my job the past couple of weeks for a project I’m working on. The makeshift green fabric we had used in the past to serve as our green screen was difficult to work with. But it just so happened that just a few days earlier, I had figured out that a bright green wall in our church works perfectly as a green screen. 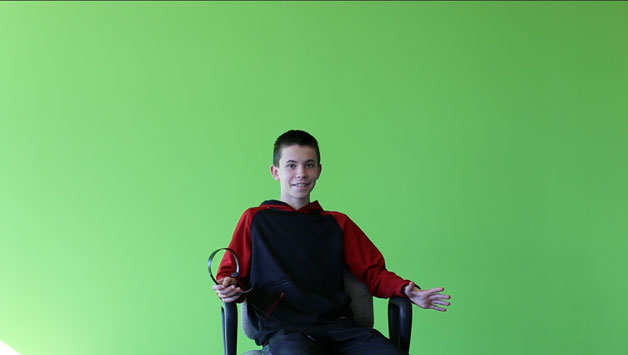 We started talking about different ways he could present something as vague as the endocrine system in terms that would be easily understandable to a bunch of middle school students. He came up with the idea of comparing it to how an air traffic controller communicates with pilots. Full of ideas, but running short on time, we headed over to the church to do some quick filming.

Our son actually enjoys doing presentations. He has a great sense of humor, and he really enjoys public speaking. I asked him to write a script of what he was going to say for the video, but he insisted that he would be fine. He would just wing it. 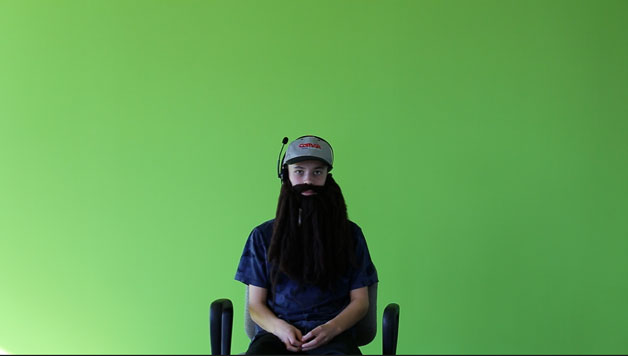 He brought along some props so he could be two different characters in his movie. He sat down in front of the green screen, and he started talking. The kid cracks me up. I was laughing so hard at certain times that I almost ruined his movie with my background laughter.

Well, we spent the rest of Friday and part of Saturday editing his presentation. I was excited for him, but also a little scared of his teacher’s reaction. He definitely took a light-hearted approach to his presentation, and I hoped she would be OK with that. Since I was the one who kept bugging him to do a movie, I was afraid of how upset he would be with me if she hated it!

I was nervous for him all day, knowing he and his partner might do their presentation today. When he got home, he had some good news. His teacher loved his movie!

Well, normally, believe me, I would not subject you, my loyal and faithful blog readers to a video of my child’s science project. But really, I think you will enjoy this one. Here it is: The Endocrine System (like you probably haven’t seen it before). 🙂