The moon is making me crazy.

You might remember reading back in June, this post about how I became fascinated with the moon. It probably sounded like one of my fads. Just a momentary interest that I would quickly forget. Like leg warmers or acid wash jeans, I would be all over it for a little while, but it would quickly lose its appeal.

Oh, no. I guess you could say, the moon and I are in a bit of a contest.

I just want to take its photo. I want to catch that big, glowing orb right as it’s coming up across the horizon. I want to see it in its largest, fullest glory as it is rising for the night and it looks larger than life at the edge of the sky.

What I’m finding is that it’s not easy. And the more difficult I realize it is to accomplish my goal, the more I want to try. Yes, the moon is making me crazy. And I’m crazy about the moon!

I mean, taking a photo of the sun is so simple in comparison. Every day at nearly the same time, it rises and it sets. It’s always huge and glowing. Depending on the weather and your location, the sunset is gloriously different every day. And that alone, makes it a wonder to capture in a photo.

But the moon? It’s complicated.

First of all, you only get one day of the month when it is truly a full moon. Sure, you have a few days before and after when it looks almost completely round from down here a million miles away. But on that one day when the moon is full, it rises and sets at nearly the same moment that the sun is coming up or going down. This is your best chance to take the best photo because the sun is shining its spotlight directly at the moon straight across the horizon.

Just figuring out when to catch the moon as it comes up takes effort. The time of the moonrise changes by almost an hour from one night to the next. I don’t want just a photo of the moon high up in the sky. I want to catch it right as it’s coming up over the horizon. At that point, it gives the impression it is way larger than usual. And to catch it, you have to be ready. In the perfect location. Tripod set up. Camera ready to shoot.

Finding a great location where I live is nearly impossible. The best spot is somewhere away from the city lights. The terrain needs to be as flat as possible. No trees. No houses. No hills. Not even a cornfield.

Around here, that means driving about 10-20 miles away from the suburbs to a farmer’s field. The problem is that once you find the perfect spot, it’s someone’s private property and there’s no where to park. I went on a moon watch back in July and ended up pulling over onto a little road that went into a bean field. I had been sitting there about five minutes when the farmer came driving down the lane in his pick-up truck from the house across the street. He pulled up beside me and asked what I was doing.

I was preparing myself to see him pull out his shotgun, as I hastily explained, “It’s a full moon tonight… and it’s a super moon… and I just want to take a photo… (and, yes, I’m completely nuts).”

Then, once you’re there on the right day at the perfect location and the perfect time, you still have to think about the clouds and the smog. Even though I was completely prepared, I couldn’t see the moon until it got to this point in the sky. I had my compass to make sure I was staring at the right spot. I was watching the sky. Looking at the time. Checking my compass. Then, it started to appear. Just a faint orange ball at first. After a few minutes, it started to materialize. 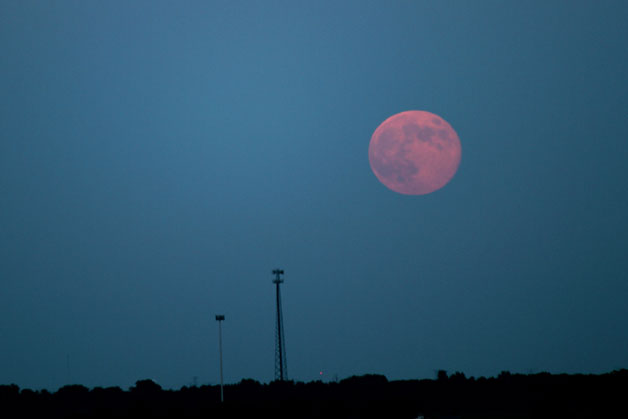 I sit there with my camera thinking of our family living on a farm in southern Illinois. I bet all they have to do is step outside on the right day and they can see the moon coming up over the horizon. I get jealous of people living in Wyoming or on a beach who probably get an amazing view without too much effort. 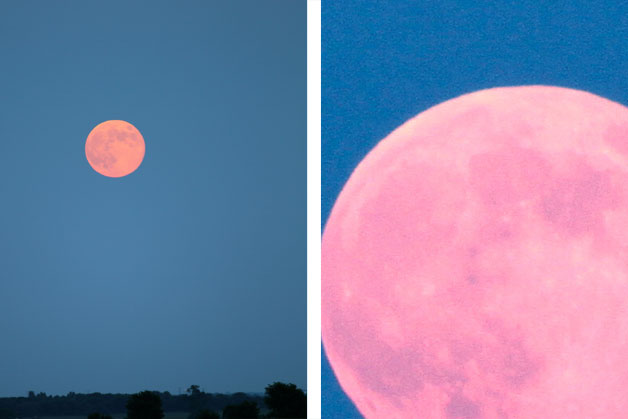 This month, it was far too rainy and overcast to see the moonrise on the day it was full. But the next morning, I realized maybe I could catch it when it was going back down. I drove for a little while and finally found a spot where I could pull over and get a few shots. 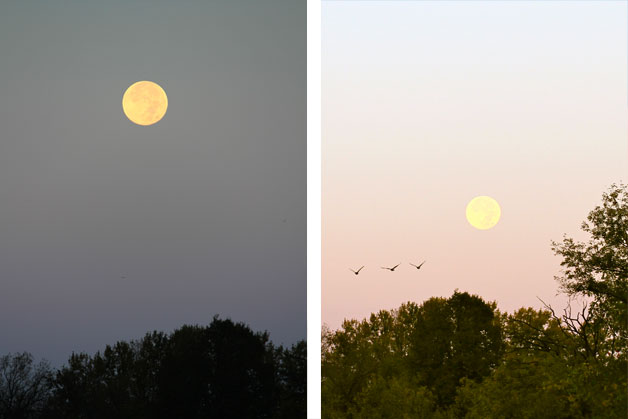 Right now, the moon is beating me. It keeps moving through the sky. I keep chasing. One of these days, I will plan a vacation to a perfectly flat destination in the middle of nowhere, and I will get my photo of the moon. Until then, I always  have next month.

Watch out, Moon! I’m watching you!

Any other moon watchers out there? Leave me a comment and let me know!